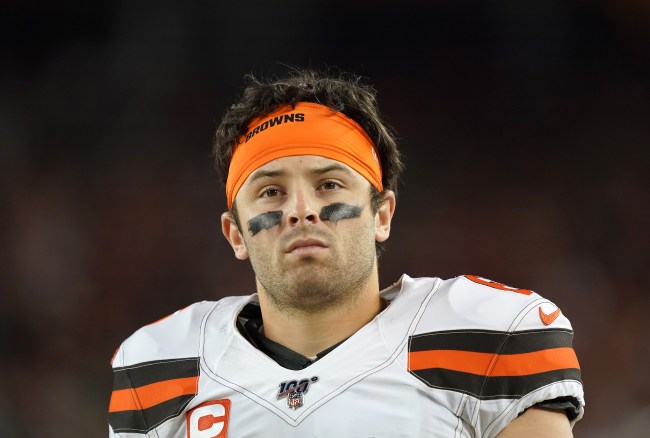 Earlier this week Niners’ Richard Sherman called out Baker Mayfield for not shaking his hand which turned out to be b.s. after fans uncovered video evidence that Baker had indeed dapped him up before the game.

Sherman would later apologize to Mayfield but said he still felt disrespected by the Browns QB not for not giving him a strong enough handshake and running off after the coin toss.

When we walked up for captains, I walk up, I shake up, give a pat on the back to just about everybody, it’s kind of how I do it and how I see it,” Sherman said. “And as I’m walking up to [Mayfield], I mean he’s the next person in line, he’s kind of just standing back with his hands down. …

“He doesn’t take a step, he doesn’t look to move up. So I put my hand out, just out of courtesy, and he gives me a petty little slap on the hand. And I took it as disrespect because the way he was standing back, he wasn’t walking up and approaching like everybody else. …

I may have phrased it differently, but I meant what I said. I did feel the disrespect. … I felt disrepect and at the end of the day that’s all the story was, really.”

Apparently Sherman isn’t the only NFL player annoyed by Mayfield, according to Mike Freeman of Bleacher Report several veterans are sick of Baker’s antics considering he’s never won anything.

The larger story, however, is not about the handshake, but about how some veterans believe Mayfield is too cocky for someone who hasn’t won anything yet.

Players, and not in insignificant numbers, have been saying quietly for some time they believe Mayfield acts like he’s a better player than he is. Said one defensive player who has a Super Bowl ring: “He acts like he’s won 10 Super Bowls. He hasn’t won any.”

Baker sure seems to be pissing everyone off these days.