Richard Sherman Blasts Baker Mayfield For Not Shaking Hands With Niners Players During Coin Toss, Wants Baker To ‘Grow Up’ And ‘Respect The Game’ 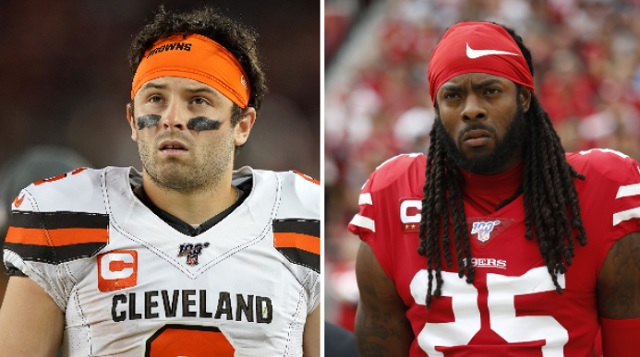 Richard Sherman doesn’t appear to be a big fan of Baker Mayfield and his attitude.

Last night, Baker had a rough game against the Niners where he went 8-22 no TDs, threw two interceptions and fumbled the ball twice while generating an abysmal 13.4 QB rating.

One of the people who picked off Mayfield last night was none other than Richard Sherman, who was more than happy to humble to loudmouth QB.

You love to see it. @RSherman_25 picks off Baker Mayfield.

After the game, Sherman went on to blast Mayfield for being childish when he decided not to shake hands with the Niners during the coin toss.

Via Mike Silver of NFL.com

What’s amazing, and annoying, was him not shaking hands at the beginning,” “That’s some college shit It’s ridiculous. We’re all trying to get psyched up, but shaking hands with your opponent — that’s NFL etiquette. And when you pull bush league stuff, that’s disrespectful to the game. And believe me, that’s gonna get us fired up.”

“Respect the game,” “You can have rivals, but pay your respect in that moment — especially when you’re young. He hasn’t earned anything in this league. How many games has he won? He’s acting like he was the MVP last year. If [Patrick] Mahomes did that, it would be one thing. But he would never do that, because he has too much respect for the game.

“And when you see a guy who doesn’t? You humble him every chance you get. Because eventually, he will have respect for the league — or he’ll be out of it.”

Update it appears Richard Sherman may have been lying about Mayfield not shaking his hand.

He didn’t shake my hand.