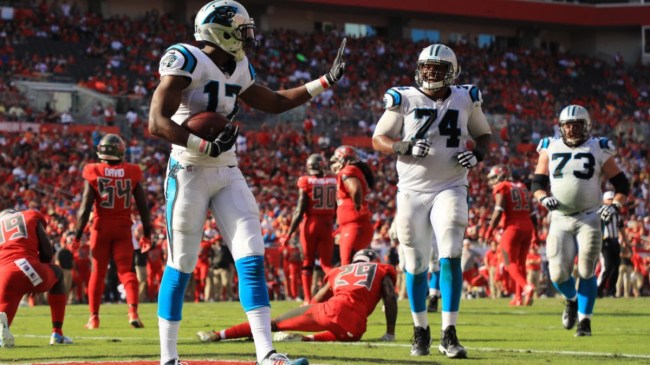 There was a time where Devin Funchess was viewed as most of the most promising young receivers in the NFL.

He was drafted in the 2nd round by the Carolina Panthers in 2015 and showed some potential during his first few seasons in the league.

Funchess made 54 catches for 844 yards and 9 touchdowns over his first 2 seasons. Then he hit his peak in year 3, catching 63 passes for 840 yards and 8 touchdowns. Unfortunately, his career quickly went downhill from there and he was barely even appearing in games anymore just 2 seasons later.

Funchess is a free agent now, hasn’t appeared in an NFL game since 2019, and has attempted to revive his career with a move to tight end.

Funchess did some time on the Lions’ practice squad this summer and told Bally Sports that he has been contacted by a few teams recently. However, he also revealed that he’s interested in making the switch to basketball and trying to eventually make it to the NBA.

He also says that 3 NFL contenders are looking to sign him & hints at the Philadelphia Eagles!

I know I’d have to go overseas and play to get some film, but after that, my dream growing up was to play in the NBA. So that’s my main goal. That’s what I’m going to make happen.

Funchess hasn’t played competitively since he was in high school, but has said in the past that he would have tried out for the basketball team at Michigan if the football coach had allowed him to.

It’ll be tough for Funchess to make the switch at 28, but maybe one day we’ll see him make an impression in a second sport.