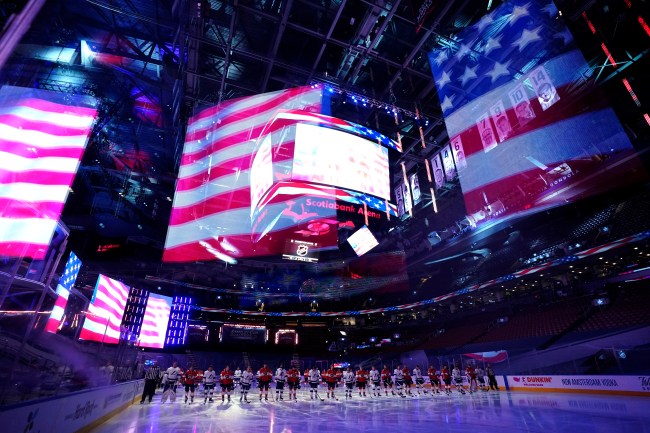 The NHL is taking a different approach than other leagues in how they show support for social justice.

On Thursday night, every single NBA player took a knee during the anthem to shed light on social injustices going on in the country.

While MLB, NBA, MLS and WNBA has seen a slew players kneel during the anthem, not one NHL player has knelt so far during their season restart.

During an exhibition game between the Pittsburgh Penguins and the Philadelphia Flyers on Tuesday everyone on the ice stood during the playing of the national anthem.

The same images of players standing during the anthem could be seen before the Rangers-Islanders game on Wednesday.

Players and coaches STANDING in solidarity for the national anthem🇺🇸👍🏻😊hockey rules🥅🏒🏒 pic.twitter.com/aIrby8QZlD

On Thursday night, Dallas Stars and Nashville Predators players also chose to stand and interlock arms. The Stars social media post on Twitter went on to include the phrase “stand for equality”

Bigger than hockey.
We stand together for equality. #GoStars | #ForSmashville pic.twitter.com/zvzCEziaJG

Stars captain Jamie Benn also used the phrase “stand for equality” while talking about how the team decided to use their time to promote social justice.

““We had some chats with Nashville and talked with [captain] Roman Josi. We thought it would be good to mix it up, link arms. We stand for equality and I think it’s important we keep talking about it and keep improving it.”

The same phrase could be seen on other teams’ social media accounts.

Together, we stand for equality. pic.twitter.com/vRMBn0XwG5

On Friday the NHL announced they were going to honor Black Lives Matter and frontline workers when the postseason begins on Saturday by having players wear “#WeSkateForEquality” helmet decals and sweaters with the hashtag and the name of a person or movement they are representing.