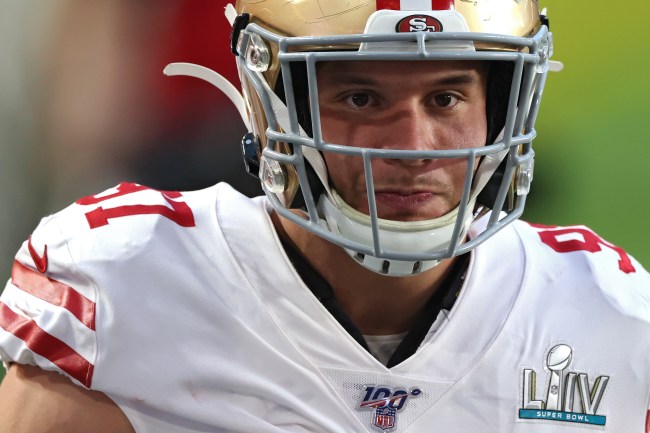 This is what happens when the Patriots aren’t in the Super Bowl. We have to latch on to dumb storylines like this one.

I understand the irony of getting outraged over the outrage, but I have danced this Outrage Inception dance before and I’m sure I’ll do it again.

The context: Nick Bosa, the 2019 Defensive Rookie of the Year, is the center of many peoples’ anger online for following a private Instagram account that would ultimately publish a post mocking Kobe Bryant’s death.

This is something that people are passionately Demanding Action for in the year of 2020. Keep in mind, we aren’t too far removed from the days when a man can kill a couple guys after the Super Bowl and the only punishment he got was a bronze statue outside M&T Bank Stadium.

Being angry has become a drug and we rationalize our addiction in the name of faux-justice. Damn that was deep. Should I run for President?

Ok, now Bosa is annoying me. He started liking posts joking about people trying to tell others why they shouldn’t be sad about an iconic sports figure flying into the side of a mountain with his young daughter. The Internet’s Kobe Bryant Emotion Checkers have become the worst people on the internet other than the people who comment “First!” on Instagram posts.

Nick Bosa started following this private IG account ahead of the 2019 NFL draft when it posted a video comparing “Liberal San Francisco” to a “Third World Country.” pic.twitter.com/RdvccnC7vs

The internet has decided that we must reform Nick Bosa before he commits an act of Instagram terror.

Nick Bosa continues to show exactly who he is. I asked the question before, if there is nothing wrong with who he’s following and what he’s liking on social media, then why is he so secretive? https://t.co/DbdZ82ZTix

I’m not here to police Nick Boss’s social media behavior, but when that smoke comes, I definitely won’t feel sorry for him and again, if he really thinks it’s no big deal, then own it.

Own it, Nick. You Super Bowl loser. Own it.