Nick Faldo Absolutely Despises The Long Ball, Thinks Tees Should Be Banned To Fix The ‘Distance Problem’ In Golf 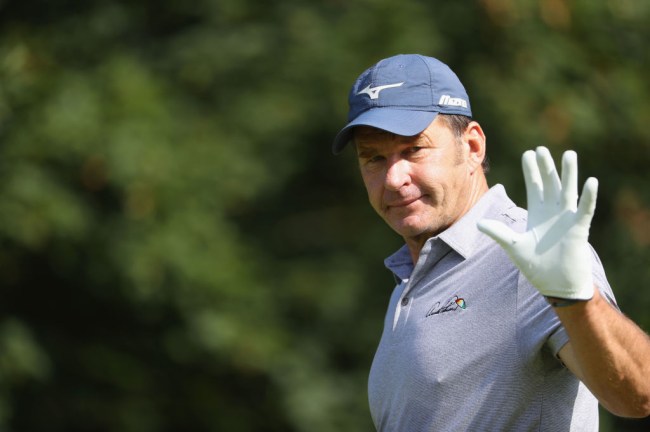 One of the great debates in the golf world revolves around ‘the distance problem.’ With modern technology, both from a club and ball standpoint, golfers are simply hitting it further off the tee and essentially overpowering golf courses.

When it comes to said ‘distance problem’ in professional golf you either fall on one side or the other, either there is a problem or there isn’t.

Sir Nick Faldo is in the crowd that says there is a problem and while there are plenty of ideas out there about shortening the long ball, Faldo’s is pretty out there.

The former world No. 1 golfer joined Geoff Shackelford on The Shack Show and explained that with the advances in driver technology, particularly the larger faces and sweet spot, one quick fix to all of this would be banning tees.

Before explaining this idea he flashed back to the ‘good old days’ when there were only a handful of great drivers. It’s worth noting that back in the day drivers were made of persimmon wood and the balata ball was in play; technology could only go one way from those days, up.

“The other simpler way is saying… if we ban tee pegs,” Faldo said. “If they went and played a tournament with no tee pegs, right? Well, the guys would have to alter their driver. You would be allowed to place it on the grass.”

“Now, they won’t be using [drivers that are] 6-degrees,” Faldo said. “They’d say, ‘OK, I need 9 (degrees), I need 10, I need one that’s going to get it airborne a bit and get a bit of give in the face.’ That would seriously change it. Sure they could hit a 3-wood… that actually would be your optimum…I’ve just seen Rory’s numbers, still 285 yards through the air [with a 3-wood]… but it’d be a real tough hit to get a driver off the deck.”

Banning the tee and forcing players to use wet sand like they did back in the late 1800’s/early 1900’s would be interesting, but it would also feel like a step back.

Faldo wants the importance of an actual quality strike with a driver to mean something and a miss-hit not still fly 300 yards in the air, but it’s simply too late to go the other direction. ‘Speed’ and ‘distance’ have been the two key words involved with any new driver or ball for decades now, advances in that technology aren’t going to stop.

If the driver, 3-wood, and ball technology keeps reaching new distances players are going to find a way to keep hitting the long ball even if it’s leaving a makeshift sand tee and not a piece of wood.

The thought of making professionals hit the same exact golf ball though, now that seems like an idea worth discussing.