Bears Reportedly Tried To Trade Nick Foles Back To Eagles, But He Wanted Nothing To Do With Philadelphia 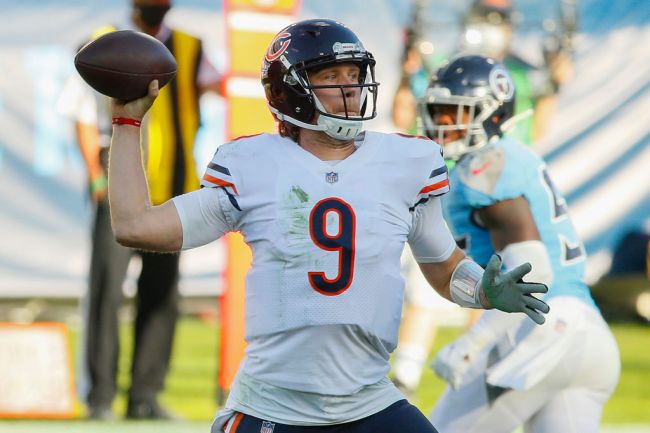 Nick Foles is getting set to enter his second season with the Chicago Bears, and prior to the 2021 NFL Draft, he was probably looking forward to the opportunity. Sure, the Bears went ahead and made the mistake of calling Andy Dalton ‘QB1’ but Foles had to like his chances of pushing Dalton out of that spot and at the very least be a solid backup. In other words, he had a job that wasn’t going anywhere, but then Justin Fields happened.

With the Bears trading up to draft the Ohio State quarterback, Foles and his sizable contract are now expendable, to put it lightly. Chicago simply doesn’t have room for the former Super Bowl champ, so it’s looking to trade him to pretty much any team that wants him.

According to NFL insider Tyler Dunne, the Philadelphia Eagles are one of the teams the Bears have called about a possible Foles trade.

If you think that Foles, despite his somewhat ugly exit from Philadelphia, would look at the Eagles’ QB room and see an opportunity there with Jalen Hurts as the presumed started, you’d be mistaken. Apparently, Foles is the one that turned down the idea of being traded back to Philly.

“The Bears tried cleansing their hands of the Nick Foles mistake by trading Foles back to Philly. Foles didn’t want to go, one source says, so the Eagles refused to trade for a QB who wouldn’t report.”

Foles is a guy with a ton of experience and is a legend in Philadelphia and is certainly a guy you’d like to have in that locker room, but maybe that’s exactly why he didn’t want to have a comeback tour with the birds. Perhaps he didn’t want to be that veteran that, in the media’s mind, push Hurts and stir up controversy.

Plus, he’s been there, done that, and done it well, you can’t blame him for not wanting to return to Philly and possibly ruining that reputation he’s built.