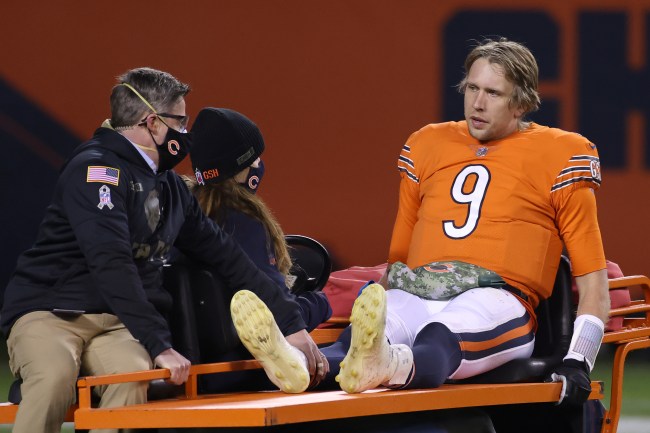 It’s been a hard year for quarterback Nick Foles and the Bears offense, and Monday night’s loss to the Vikings was no exception. The team signed Foles in the offseason to backup incumbent starter Mitchell Trubisky, but the Super Bowl champion was named the starter in Week 3 and has struggled to do anything behind a poor offensive line. He went 3-4 in his first seven starts, and was losing 19-13 with less than two minutes remaining in the fourth quarter before he was knocked out of the game on Chicago’s final offensive possession.

Here's the play, with 34 seconds left in the game: Nick Foles gets slammed to the ground and had to be carted off. pic.twitter.com/1WLHoTAP4A

On 1st-and-10, Foles dropped back and held on to the ball as long as he could before being forced to throw it away and taking a lick from Ifeadi Odenigbo.

Nick Foles thrown down hard and hurt on this play 🙏 pic.twitter.com/w28e8RZVS6

He stayed down for awhile and laid fairly motionless. It wasn’t clear what part of the body he injured, but it appeared to be his upper body.

This really sucks to see.

The cart is coming out on the field for Nick Foles pic.twitter.com/W0Tya1Tcyy

Foles was fully conscious and responsive. After the broadcast cut to commercial, it returned to the NFL journeyman being carted off of the field.

Nick Foles left the Bears-Vikings game on a cart after taking a hit late in the 4th quarter. pic.twitter.com/cOMb7bRfFd

The eight-year quarterback most recently returned from a broken collarbone in Jacksonville last season and split time with Gardner Minshew under center before heading north to the Windy City in the spring. He has totaled 1,746 yards and 10 touchdowns with 7 interceptions in 2020 and his status for the remainder of the season is unclear. Trubisky was listed as inactive before the game so Tyler Bray came in to try and lead a comeback. Bray played with Kansas City from 2013-2018 before signing with Chicago in 2018. In that timeframe, he attempted one pass. The former Tennessee Volunteer went 1-of-5 and did not pull off the miracle win.