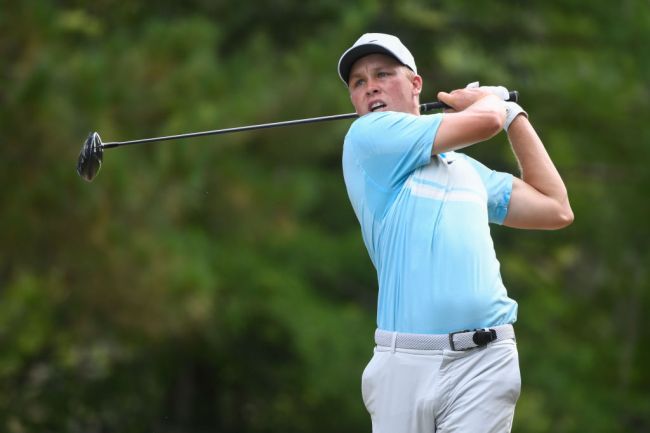 You may consider yourself the greatest teammate in the history of sports, but after reading this story about golfer Nick Hardy you’ll realize that he sits on that throne.

Hardy is currently coming off of his best season as a professional. After picking up a third-place finish and five total Top 10 finishes on the Korn Ferry in 2020, he carried that momentum into Monday qualifying for this week’s Sony Open in Hawaii. This story, however, goes back to his college playing days at the University of Illinois.

The story takes place at the 2018 Big Ten Championship when one of his teammates elected to go into the trees to pee while the hole was backed up. It didn’t go too smoothly as he pulled his pants up a little early and apparently had a bit of extra drippage. When you’re wearing grey pants, extra drippage is not ideal and it looked like he legitimately peed his pants, which is even devastating for a man in college.

Hardy, knowing his teammate was a bit embarrassed, or at the very least distracted, went into the woods and purposefully pulled his pants up early as well making it look like he peed himself. I think pouring a bit of water on himself would’ve worked too, but hey, it’s the thought that counts.

Hardy pulled a ‘Billy Madison’ for his teammate and he went on to stick one on the Par 3. Illinois went on to win the Big Ten that week while Hardy took home medalist honors.

I got this via a 3rd party, 100% thought I was being trolled, confirmed with all involved.

So, now you have a new golfer to pull for by the name of Nick Hardy.