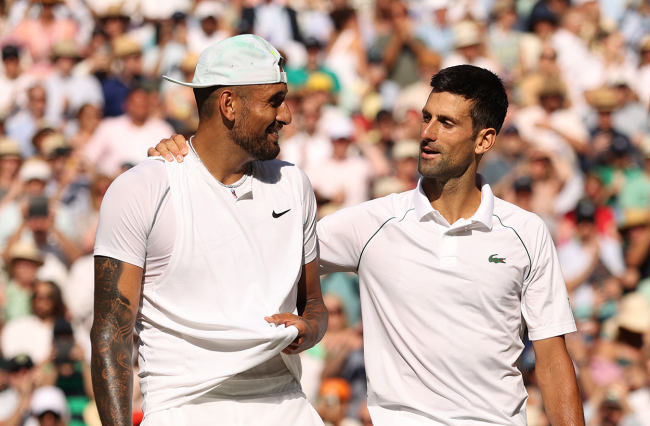 Novak Djokovic continued his dominant run at Wimbledon on Sunday morning. The 35-year-old won his fourth-straight title at The Championships in an awesome four-set match against Nick Krygios.

Prior to winning his 38th match in a row on center court, Djokovic made a bet with his opponent that now has him on the hook for a tab.

That’s exactly what ended up playing out and a tremendous back-and-forth match resulted in fantastic entertainment. Prior to the match, the two fierce competitors placed a bet on the match, kind of.

Leading up to the Final, there was a shared moment of camaraderie between Djokovic and Krygios.

When Djokovic was deported in January prior to the Australian Open after decision to cancel the athlete’s visa over his vaccination status, Krygios stood up for the world No. 1.

After many years with no love lost between the two passionate players, Krygios’ decision to stand by Djokovic at the Aussie Open led to what the former called a “bit of a bromance.” The beef is in the past. In fact, they now DM one another on Instagram and have become friends.

Leading up to their Wimbledon Final match, the two took their friendship public. Krygios asked Djokovic if they are friends now, to which the latter joked that he accepted the invitation for a drink or dinner.

The winner of Sunday’s match, he said, would pay. Krygios agreed and said that they should take it a step further by hitting a night club. Well, Djokovic won. So by his terms, he owes Krygios a drink or dinner— or both!

After the match, Krygios said that he is tired. Understandably so. That might rule out the nightclub idea, but he also said that he needs a well-deserved vacation. Perhaps he and the seven-time Wimbledon champion will be out in London tonight on Djokovic’s tab?