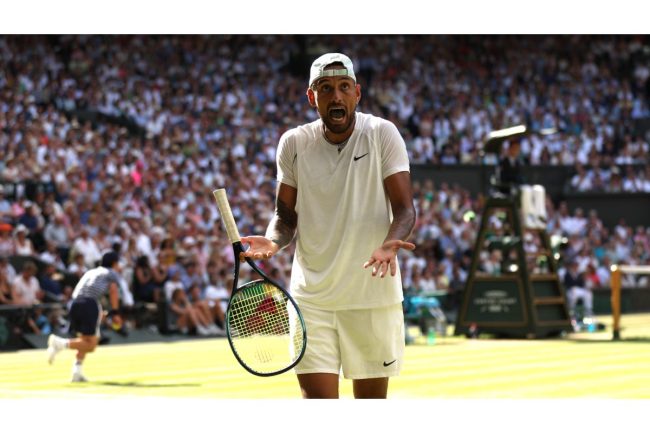 Nick Kyrgios battled Novak Djokovic in the Wimbledon Final for a chance to claim his first tournament championship. After taking the first set by a score of 6-4, Kyrgios was defeated in four sets, falling to Djokovic in the final three frames.

The win landed Djokovic with his seventh Wimbledon title, placing him just one win behind Roger Federer for the most Wimbledon championships in tennis history. It was also Djokovic’s 21st Grand Slam title, one shy of all-time leader Rafael Nadal.

The loss was obviously frustrating for Kyrgios, though he was complimentary of the Serbian star following the match. And thanks to a pre-match wager, it looks like Kyrgios will have to take Djokovic out for dinner and drinks.

What might’ve been more frustrating than the loss, though, was a belligerent fan in the front row. The woman, apparently very well intoxicated, was talking to Kyrgios throughout the match. It got to the point of the Aussie asking that the lady be removed from the court.

Kyrgios was seen calling out a drunk fan for heckling during his Wimbledon Finals match. He asked that she be escorted from the court.

"She's drunk out of her mind and talking to me in the middle of a game. She's the one who looks like she's had 700 drinks."

“She’s distracting when I’m serving, in a Wimbledon Final. There’s not a bigger occasion. You didn’t believe me, and then she did it again. It nearly cost me the game.

“Why’s she still here?! She’s drunk out of her mind in the first row screaming to me in the middle of the game. What’s acceptable? Kick her out.”

When asked by the umpire to identify the disorderly woman, Kyrgios gave a hilarious response.

“I know exactly which one it is. It’s the one who looks like she’s had about 700 drinks.”

This distraction obviously didn’t help Kyrgios’s chances, but it made for an entertaining Finals event.