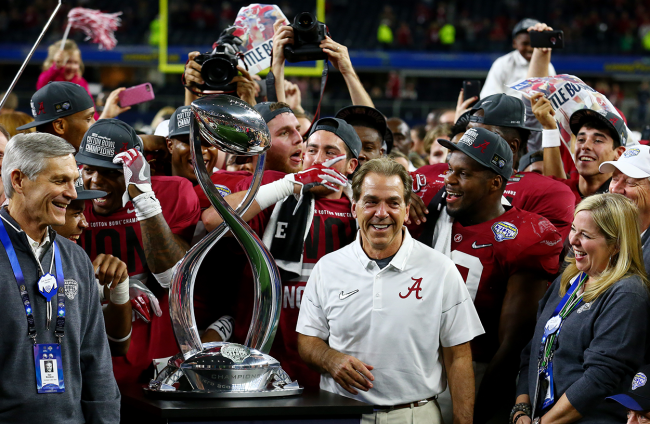 Nick Saban’s coaching tree is truly remarkable. Every coach that works under the most successful college football coach of all-time seems to go on to do great things.

Now, after Dan Lanning was hired to become the next head coach at Oregon on Saturday, Saban’s 2015 coaching staff at Alabama is officially the greatest of all-time. Or, at the very least, tied for that title.

During that season, the Crimson Tide lost only one game (to Swag Kelly and Ole Miss). They won the SEC West, won the SEC Championship Game, shutout Michigan State 38-0 in the College Football Playoff semifinal, and beat No. 1 Clemson in the national championship. Derrick Henry led the nation in both rushing yards and rushing touchdowns that year and won the Heisman Trophy.

It was a dominant season from start to finish.

At the helm of the program, of course, was Saban. Around him, his staff of assistants was literally the best in history.

Hayden Fry's 1983 coaching staff at Iowa is considered the best group of head-coaching talent on one staff in the history. There were six head coaches on it.

When you really think about it, that’s insane. Six coaches who were assistants under Saban are now head coaches.

And not only that, but all six programs are big-name, power-five conference schools. One of them is in the College Football Playoff and two of them are competing in New Year’s Six bowl games.