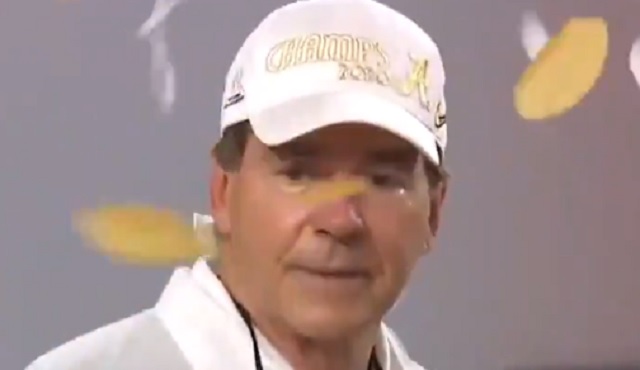 Nick Saban very rarely shows emotion so it’s strange to see him get choked up after a game.

13-0 and a national title for @AlabamaFTBL 🏆 pic.twitter.com/BgpGlskZZF

During the team’s postgame celebration Saban appeared to be fighting back tears while listening to his players talk about what this season meant to them.

Is Saban crying? He’s not a robot? pic.twitter.com/kDMNnzzJSz

Fans immediately started speculating whether Saban was being emotional because he was considering retirement.

Emotional because he decided it's time to retire? 🧐 https://t.co/mpWWylEKpP

Saban crying means the end is near! #retirement

Oh yeah… he’s emotional. Must be time for retirement https://t.co/hYzACLoGx6

Saban over there crying like this the last one

Seems like “retirement is around the corner” tears 👀👀👀 https://t.co/N23lSRkhEl pic.twitter.com/hFI8n3HtwQ