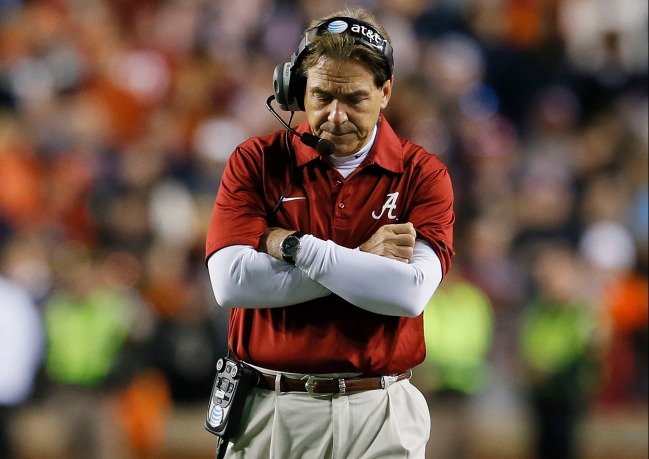 After losing to Auburn on the last-second field goal return, Alabama head coach Nick Saban was ready to call it a career. He was entertaining the idea of leaving the Crimson Tide.

Detailed in John Talty’s new book ‘The Leadership Secrets of Nick Saban: How Alabama’s Coach Became the Greatest Ever,’ Saban was discussing a potential exit from coaching to work for ESPN.

On the final play of the 78th Iron Bowl, played on November 30, 2013 at Jordan-Hare Stadium in Auburn, Alabama, the No. 1-ranked, undefeated Crimson Tide was tied at 28 with the No. 4-ranked, 10-1 Tigers. After getting out of bounds with one second remaining, the visitors had a chance to win the game with a field goal.

But the kick was short.

Auburn’s Chris Davis caught the ball just in front of the goal posts. He proceeded to run approximately 109 past the Alabama defense to score and win the game. It was epic.

Saban was over it and considered a move to the media.

According to Talty, Saban met with a media talent agent who represented Kirk Herbstreit, Skip Bayless, Colin Cowherd, and others prior to the 2013 season. When the year ended on the Kick Six, Saban empowered his agent to get in touch with ESPN for a conversation.

That meeting was then held in Pasadena, California with Saban, Jimmy Sexton and a former senior executive at ESPN. During their time together, Saban asked the executive about ESPN and tried to feel out whether it would be the right fit.

In the end, Saban chose to stay at Alabama. But his interest in ESPN was real.

Since the Kick Six, Saban has won three national championships and six SEC championships at Alabama. If he had left for ESPN at the end of 2013, he would not have become the most successful coach in the sport. Pretty crazy to think about what might have been.