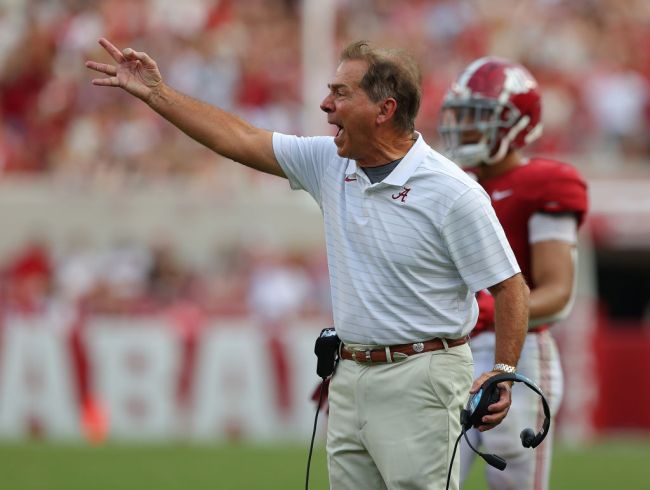 You never know what you’re going to get when Nick Saban steps in front of a mic. It’s no secret that taking to the media isn’t the Alabama head coach’s favorite thing to do in the world, but sometimes he’s a bit crankier than usual when standing in front of the press. His Wednesday press conference was a prime example of that.

A reporter asked a question about tight end Jahleel Billingsley. He hadn’t done much through the first two games of the season, but saw more action during the Crimson Tide’s close win over Florida last weekend. A reporter asked Saban why that was the case and Saban quite clearly thought that was a pretty dumb question.

“Did any of you play sports? I mean, the coach is supposed to play the best players, right?” Saban asked. “Then it’s up to the players to do what they’re supposed to do so they get to play because that means they’re one of the best players now. So that’s what [Jahleel] is doing now.

To be fair, it wasn’t the best question in the world. Everyone with a brain understands that a player getting more time on the field means he’s doing things right behind the scenes and at practice. The reporter likely knew this but asked the question anyway.

Saban could have been a bit nicer in his chastising of the reporter, but he’s not paid to be happy-go-lucky with the media. When a questionable question is asked, he has the right to question the ones asking.