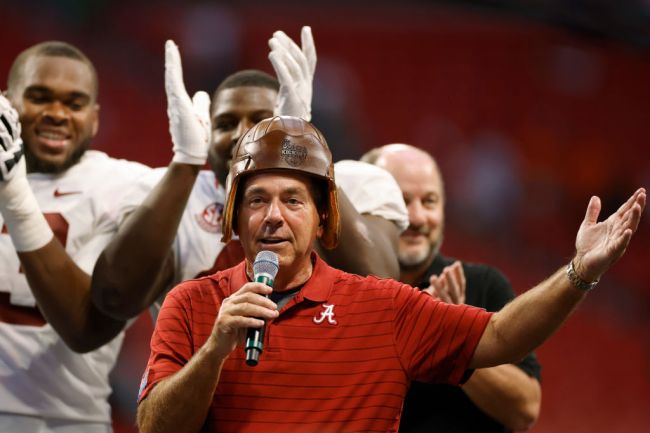 You wouldn’t know it based on how he looks and acts on the Alabama sideline, but Crimson Tide head coach Nick Saban likes to have a little fun every once and a while. This includes telling other people to ‘touch deez’ or ‘suck on deez.’

Yes, that is correct, Nick Saban is a fan of ‘deez nuts’ jokes according to Alabama safety Jordan Battle.

During Tuesday’s press conference, Battle was asked if he had any favorite Saban sayings and elected to tell the world that his two favorite sayings he’s heard from his head coach are ‘touch deez’ and ‘suck on deez.’

The random scream of laughter that comes through in the video about two seconds after Battle says ‘suck on deez’ is pure gold.

Perhaps the funniest moment in Alabama player interviews in my 12 years covering the team. pic.twitter.com/WXs4aiWlqr

It’s safe to say that Battle won’t be asked to speak with the media for as long as he’s still a member of the Alabama football team.

I think we can all appreciate Battle’s honesty though in giving us an inside look into Saban’s colorful vocabulary.