Nick Saban Explains The 2 Most Important Words On An NFL Draft Report, Shares Brilliant Message About Creating Value For Yourself 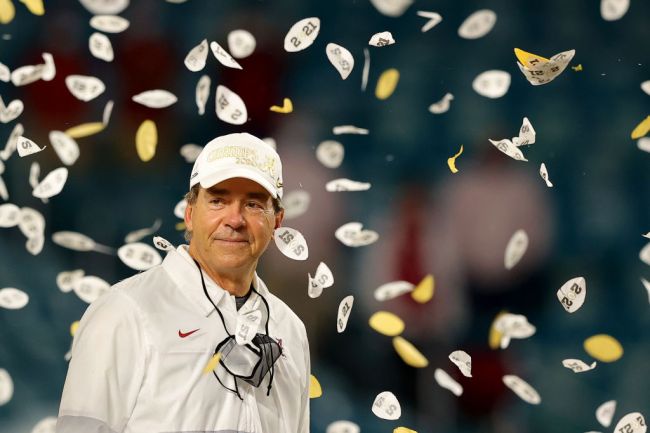 Nick Saban has a pretty firm grasp on the game of football. Not only is he arguably the greatest coach to ever step foot on a college football sideline, but he also spent close to a decade working in the NFL before turning Alabama into the powerhouse that it is today. He knows a thing or two about both sending players to the NFL Draft and scouting players for the NFL and in a recent interview with James Light, he dropped some serious knowledge about the scouting experience.

Saban shared that there are two words that stand out on every single scouting report. The first one is ‘and’ and the second one is ‘but.’

“I tell our players all the time, two most compelling words in a draft report is ‘and’ and ‘but,’ Saban said, before giving an example in talking about a hypothetical defensive back. “He’s got quick feet, change of direction, good long speed, can play man to man, he’s got toughness, got really good ball judgement and really good ball skills and he’s a good person, he was a leader on the team, graduated from school, and the coaches loved him.”

He then goes on to talk about that same defensive back, but inserts the dreaded ‘but’ at the end.

“But, he had a positive drug test, he had a domestic violence incident with his girlfriend, got in a fight in a bar when he was a freshman, and the strength coach said he wouldn’t piss on him if he was on fire. Who do you want on your team,” Saban asked.

Saban also went on to explain that as soon as a player declares for the drat, teams are looking for a reason not to pick you instead of why they should pick you.

Nick Saban talking about what are the two most compelling words on any #NFLDraft report… "And" & "But" pic.twitter.com/Pu1k9OS3Ow

I think this Mr. Saban fellow has a pretty bright future ahead of him.