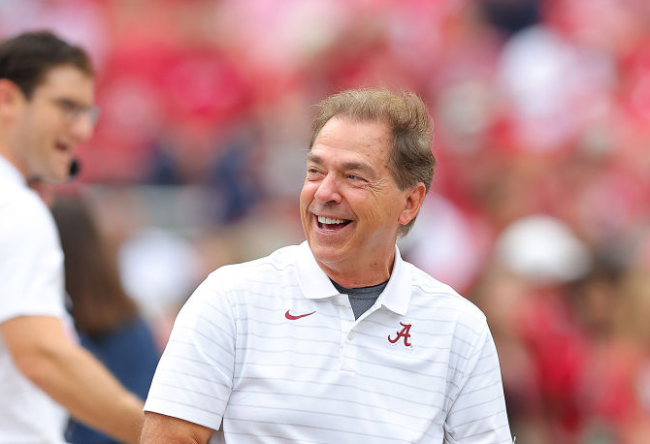 More often than not, Nick Saban seems to be in a bad mood anytime he steps in front of a podium. He’s very Bill Belichick-esque in that regard, but unlike Belichick who answers in 10 words or less, Saban lets you know how he’s feeling. He’s also no stranger to calling a reporter out for asking a dumb question.

His Wednesday press conference was no different. Saban looked like he wanted to be anywhere else on the planet, but then Aaron Suttles of The Athletic asked a question and brought a sidekick with him on camera, his infant son.

All of a sudden Saban’s mood completely shifted, we even got a grin from the Crimson Tide head coach. Saban’s reaction to seeing Suttle’s son on the screen was absolutely awesome.

“I have a question for you, first off all, did I finally get to meet the boss,” Saban asked. “This is the best behavior since I’ve seen you on since I’ve been here. You don’t have to apologize, if this is how it’s going to be, I’d like for him to be here all the time.”

You have to tip your cap to Suttles here for pulling double duty. Plenty of reporters would’ve either skipped the press conference in general, or at the very least asked their question with the camera off, but Suttles went all out. Now, he’s got a clip he can show his son forever about the day he crashed the press conference with the greatest coach in the history of college football.

Well, this is a moment for which little man will one day laugh at me.

Thanks to Coach Nick Saban for showing me some graciousness as I was forced to pull dad duty during his press conference tonight. https://t.co/9foo8T6Gp9