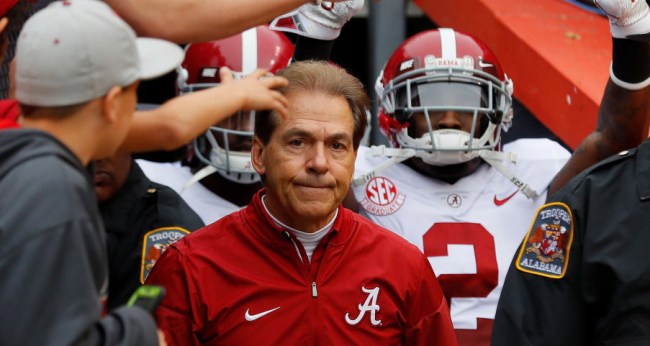 For a guy who will have been paid more than $90 million for coaching college football from 2017 to 2025 by the University of Alabama, Nick Saban sure acts like he’s one miserable son-of-a-gun.

Not even the fact that he’s won six national championships, five with Alabama, and this year’s team has outscored its opponents by an average of 54.2 to 13 in five blowout wins, can seem to make him happy.

Case in point: Saban went off on Alabama students at his press conference this week for not showing up to watch yet another 100% guaranteed blowout win against a small school with no chance in Louisiana-Lafayette.

The Tide came into that game as 49-point favorites versus the Ragin’ Cajuns who limped into Bryant-Denny Stadium at 1-2 with one of their losses being a 56-10 drubbing by the 16th ranked Mississippi State Bulldogs. So it’s pretty easy to see why Alabama students would be less than interested in game they knew was going to a lopsided affair.

None of that mattered to Saban, however.

.@AlabamaFTBL #NickSaban goes off Wednesday night on too many empty seats at the stadium last weekend.

You can tell this has building up over the last few days.

Classic Saban and he does not hold back!#Bama#RollTide @finebaum @ClayTravis @darrenrovell pic.twitter.com/p7BQnptEfQ

“I can honestly say I was a little disappointed there weren’t more students at the last game,” said Saban, reported 247Sports. I think we’re trying to address that. I don’t think they’re entitled to anything, either. Me personally, I think it ought to be first-come, first-serve. If they don’t want to come to the game, they don’t have to come. But I’m sure there’s enough people around here that would like to go to the games and we’d like for them to come too because they support the players.

“I’ve never said anything like that before. When I first came here, you used to play that tradition thing up there and everybody was cheering and excited and happy and there was great spirit, aight. Now they don’t even cheer. They introduce our players and nobody even cheers. So I don’t know, maybe there’s something else somebody else ought to talk about. Maybe I shouldn’t talk about it. Maybe I already talked about it more than I should. So you all can beat me up for that if you want.”

Saban later reiterated that “to see half the student section not full, I’ve never seen that since I’ve been here before.”

Which, as Barrett Sallee of CBS Sports points out, is not exactly true, as he said a very similar thing back in October of 2013.

Perhaps, and I am just spitballing here, perhaps if Saban wants the students to actually give a crap about their home games they should stop scheduling cupcakes like Louisiana-Lafayette, Arkansas State and The Citadel. Just a thought.

Alabama students are loving this. pic.twitter.com/gMdPrDzpYz