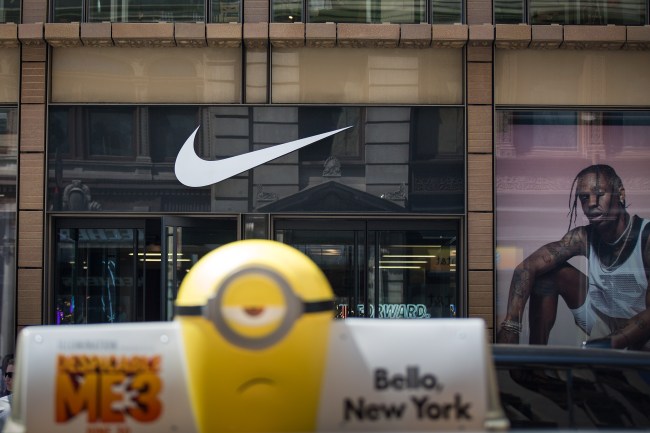 NEW YORK, NY - JUNE 15: The Nike 'swoosh' logo is displayed on the outside of the Nike SoHo store, June 15, 2017 in New York City. Nike announced plans on Thursday to cut about 2 percent of its global workforce. (Photo by Drew Angerer/Getty Images)

For the 2nd time this month, Nike (NKE) has acquired a company capable of “advancing (its) capabilities in computer vision and artificial intelligence”. The technology developed by NKE’s latest purchase, Invertex, will power the company’s “consumer direct offense.” Invertex specializes in mass customization, developing 3D body scanning software that will “create the most compelling Nike consumer experience”; both in store and online. News of the purchase comes just 3 weeks after the company announced it had acquired Zodiac; a consumer data analytics firm capable of improving customer acquisition, reducing churn and enhancing the accuracy of sales forecasts. Financial terms were not disclosed on either deal.

Howie Long-Short: NKE’s desire for a “consumer direct offense” led to the formation of Nike Direct, a corporate restructuring focused on the 12 markets expected to generate 80% of corporate growth through 2020 (when it hopes to do $50 billion in sales); New York, London, Shanghai, Beijing, Los Angeles, Tokyo, Paris, Berlin, Mexico City, Barcelona, Seoul and Milan. While $50 billion remains a pie in the sky figure, the company did report a “significant reversal of trend in North America”, growth in DTC sales and improved international sales (+24% YOY in China, +19% in Middle East and Africa) as it beat analyst expectations (revenue + 7% to $8.98 billion) in fiscal Q3 ‘18.

Fan Marino: In a surprising development, the University of Washington spurned Nike following expiration of a 20-year pact, signing a 10-year, $118 million deal with Adidas; one of the 10 most lucrative apparel contracts in college athletics. The timing of the Zodiac and Invertex acquisitions give off the appearance that NKE is choosing R&D over marketing, but NKE likely made a conscious decision to pass on Washington once the deal’s total value passed $88 million; the amount they’ll pay rival (and Nike founder Phil Knight’s alma mater) Oregon, over the next 11 years.

GoPro has introduced a new entry-level version of its action camera amid declining sales ($1.2 billion in ‘17, down from $1.6 billion in ’15) and a wave of competition (see: Sony, Yi). The $200 Hero is “as easy to use” as a smartphone, with functionality that closely resembles the company’s higher priced models (minus 4K, 360 degrees, less fps). The camera maintains a 2” display and a touch screen back, shoots 10MP photos and 1080p video at 6 fps, has video stabilization, is voice controlled, waterproof up to 33 feet and both WiFi and Bluetooth enabled. The product is being marketed as a “great first GoPro”, one for “people looking to share experiences beyond what a phone can capture.”

Howie Long-Short: GoPro (GPO) shares jumped 7% (to $5.22) on Thursday on news that Xiaomi Corp. is thinking about submitting an offer for the beleaguered action camera maker. Of course, the news doesn’t exactly come out of left field, as we noted back in January that the company had hired JP Morgan to explore a sale. GoPro currently has a market cap of $763 million, but according to The Information, could fetch as much as $1 billion.

Fan Marino: Offering a device for the masses (as opposed to the outdoor enthusiast), may enhance unit sales, but the strategy has failed GoPro (GPRO) before. In 2015, the company introduced a $130 Hero and a $200 Hero+. While the devices sold, the company had cannibalized sales of their higher-tiered products (Hero 4 Silver, Black) in the process; revenue growth dropped from 41% in ’14 to 15% in ’15. By early 2016, GPRO had discontinued the Hero & Hero+ and by the end of the calendar year, was promoting a $300 Hero 5 Session as their entry-level camera. Revenue declined 27% in 2016 and the company reported a full-year loss.

It should be noted that in March, the company signed a licensing deal with the global manufacturing firm Jabil, Inc. (JBL), enabling their use of GPRO lenses and sensors within 3rd-party “Go-Pro approved” products (think self-driving cars). It’s the company’s hope that a higher profit margin licensing business will offset margin decline as sales of the new device grow.