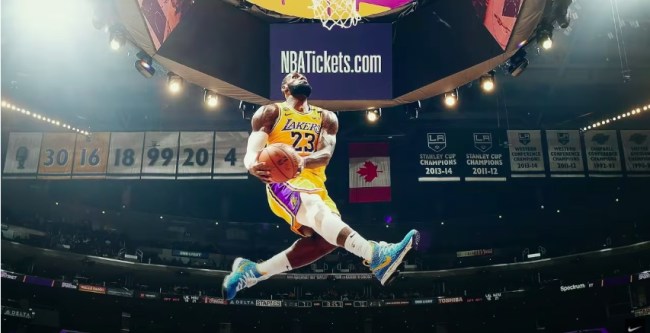 It’s hard to believe it’s been just two years since a string of LeBron James murals in Los Angeles were defaced to read things like “LeFraud” and “3-6.”

Can’t believe this is how the LeBron James era began in Los Angeles.

I bet the people that vandalized this mural have had a slight change of heart. pic.twitter.com/6xEEOvoOMP

That same Fraud near single-handedly delivered the Lakers, a team that hadn’t won a playoff series in seven years, its first NBA title in a decade.

The dude is a cyborg, a genetic freak who surpassed all expectations set for him before he was old enough to grow his first pube. Basketball fans have been gifted 17 largely uninterrupted years of this man, and that’s well worth a few eye rolls for his incessant complaining to the refs. Small price to pay.

In the wake of LeBron’s fourth title and the franchise’s 17th (I guess I’ll count the four in Minneapolis in 29 B.C.), Nike released a minute-long ad spot titled ‘You Can’t Stop L.A.,’ depicting the thrill of victory in the midst of a no good, very bad year.