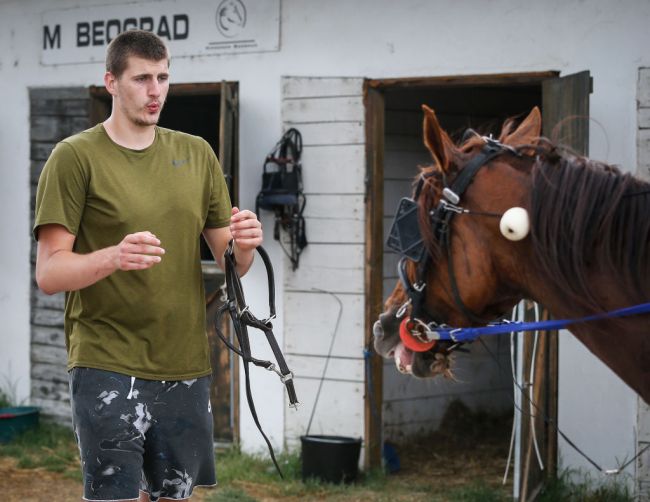 Nikola Jokic is back in Serbia. Three days after the Nuggets were eliminated from the playoffs, the 26-year-old NBA MVP was spotted in his hometown of Sombor.

Jokic, a noted horse-lover, was seen riding gleefully in a horse-drawn buggy at his local hippodrome on Wednesday. Donning his prescription glasses, a backward hat and a cutoff t-shirt, he has not a worry in the world.

Nikola Jokic has been spotted back in Serbia and he’s absolutely LIVING 😂 pic.twitter.com/JuxuVNXQsZ

The approximate travel time from Denver, Colo. to Sombor, Serbia takes 13 hours so he wasted no time getting back to where he grew up.

Taking some time off.

Jokic, who appeared in all 109 of the Nuggets’ games since Aug. 1 finished the 2020/21 season in total minutes with 2,488. Factor in a physical playoff series with quite a bit of altercation and he is surely exhausted.

In fact, he was seen trotting around the track just hours after he released a statement regarding his rest. Jokic and the Nuggets announced in a statement that he will not join the Serbian national team for the Olympic qualifying tournament and cited recovery.

“The simple condition of my body requires a longer absence from the field for recovery,” he wrote. Head coach Igor Kokskov said that he plans to speak with his star international player directly.

It is unclear whether the 6-foot-11 big will participate in the Tokyo Olympic Games should Serbia qualify. Based on his recent happenings, it does not look like he will be playing basketball any time soon.

Jokic, who mostly stays out of the spotlight, chose not to speak with local media, but he had no problem with them filming him go about his day. The resulting footage is incredible.

As a big fan of Serbian folk music while working out, he chose to enjoy the sounds of nature while riding. Nikola Jokic is a delight and we need to appreciate him in the moment.