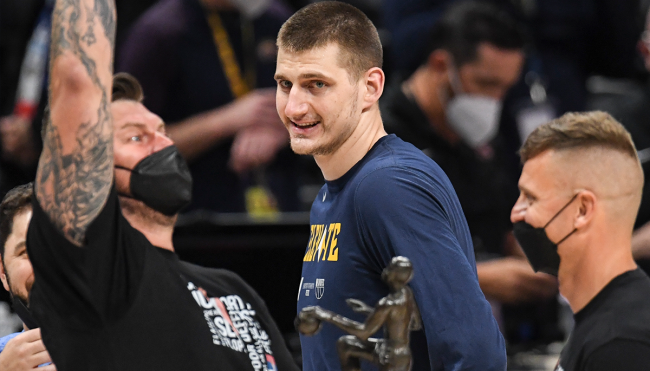 On Sunday, Nikola Jokic’s MVP season came to an unceremonious end when he was ejected from the fourth and final game of the Western Conference Semifinals series between the Nuggets and the Suns following a hard foul on Cameron Payne that was ultimately ruled a very questionable Flagrant 2.

If Devin Booker doesn’t come up to Nikola Jokic with Joker not backing down, he’s not ejected. I don’t agree with the ejection.pic.twitter.com/klPLxWfTRJ

Following the game, Jokic admitted he was understandably frustrated when he attempted to fire his team up by exerting a bit of extra effort on the steal attempt that led to his dismissal. When you consider it was the first time he’d been hit with any flagrant as an NBA player and he checked in on Payne before leaving the court, it’s hard to believe he had any ill intent.

Devin Booker also faced some disciplinary action in the form of the technical foul he was hit with for confronting Jokic to let him know he took exception to the swipe. However, it would appear Jokic’s brothers took exception to him taking exception based on a couple of videos that recently surfaced.

If you paid attention to this series, you’re likely familiar with the instantly iconic “Suns In 4” Guy who treated us to one of the best fight videos you’ll ever see by using the nose of a Nuggets fan as a punching bag during the third game of the sweep he prophesied.

I can only imagine a similar scene would’ve unfolded if security in Denver hadn’t prevented Strahinja and Nemanja Jokic from storming the court to defend their younger brother, as the massive Serbians may have honestly ripped Booker’s head clean off of his shoulders if they’d been given the opportunity.

The Jokic brothers wanted every piece of available smoke 😂😂😂 pic.twitter.com/pmUUb4gELw

I’d normally make some pithy comment noting the surprising lack of Adidas tracksuits in this video, but nothing I’m going to come up with is going to top this truly fantastic observation.

They look like they put in work in Serbia but kept him out the streets cause he had real talent. Lol https://t.co/vTMIcYjP4f

That sums up their vibe better than I ever could.