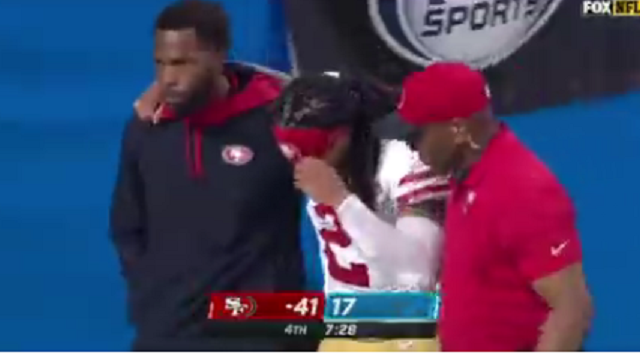 Niners CB Jason Verrett apparently knows something about his leg injury that others don’t.

During the fourth quarter of a 41-17 game in which the Niners led, the San Francisco cornerback went down with an apparent leg injury.

Verrett tried to walk off the injury but eventually broke down and got emotional before being helped to the locker room.

Hate to see this. Jason Verrett was walking to the locker room, then stopped and started tearing up 😔😔 https://t.co/cwC0GqYZE1 pic.twitter.com/0lDLSv9BPM

The #49ers are up 41-17 but CB Jason Verrett just went to the locker room in tears. Appears to be a lower-leg injury. Not good. #SFvsDET

There’s no official word on Verrett’s injury but it doesn’t look good.