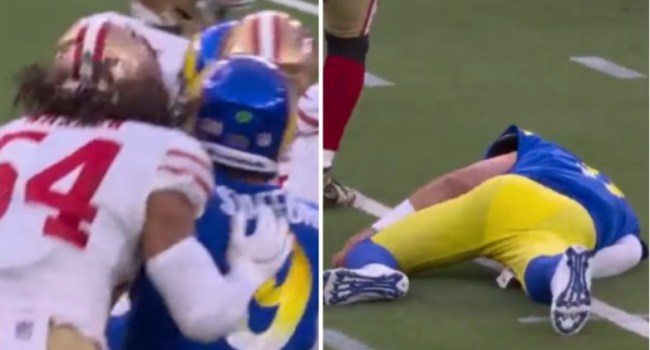 After a Rams red zone interception in the first quarter, 49ers linebacker Fred Warner walked over to QB Matt Stafford and head-butted him on the side of the head while he was turned away.

Stafford got laid out lol pic.twitter.com/RBcEnbmwOT

Refs somehow missed the play and didn’t call a flag.

Rams fans were angry and wanted Warner ejected from the game.

The NFL should have the ability to go back and review that post-INT play and eject Fred Warner. That was gross.

Wow @NFL refs where were ya lookin when THIS happened@49ers play dirty! Ya that’s YOU Fred Warner #pos

The refs when Matthew Stafford got hit in the back of the head by Fred Warner pic.twitter.com/AM2ftbOk3y