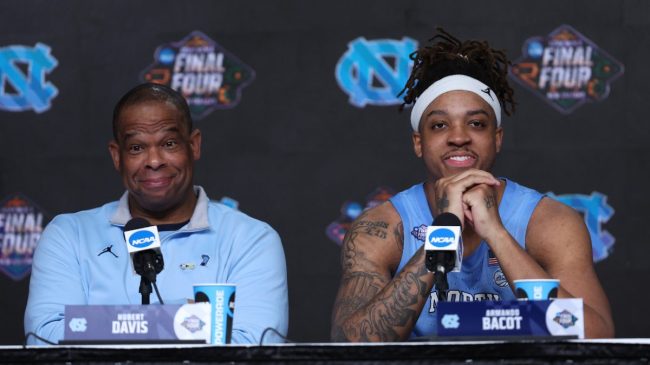 The stage is set.

North Carolina will square off against top seeded Kansas in the NCAA Tournament Final. The winner will leave with a college basketball national championship.

There are a ton of storylines surrounding the matchup.

There’s the Cinderella run from the Tar Heels. There’s Kansas’s trying to bring home its first title since 2008. There’s the surprising Roy Williams spin due to his connection to both programs.

All should make for an entertaining national championship.

One viewer will have a bit more riding on the contest, however.

This bettor placed a $400 wager on the Tar Heels to win the title at the start of the NCAA Tournament. They received odds of 200/1, placing the potential winnings at a whopping $80,000 should the bet hit.

Are you cashing out for $21K or letting it ride? ⬇️ pic.twitter.com/jWdPLmeaX9

North Carolina entered March Madness as a bit of a longshot to make the title game. As a No. 8 seed, the Tar Heels have had to pull a few upsets to get in this position.

That includes upending No. 1 seed Baylor, No. 2 seed Duke, and No. 4 seed UCLA. One more big win will result in a huge payout for this lucky bettor. That is, if they don’t take the $21,000 cash out option.

The Tar Heels will once again enter this matchup as an underdog, but that’s been their M.O. all tournament long. They’ve gone a perfect 5-0 against the spread in previous action. A 6-0 mark concluding with a title win would have this bettor jumping for joy.