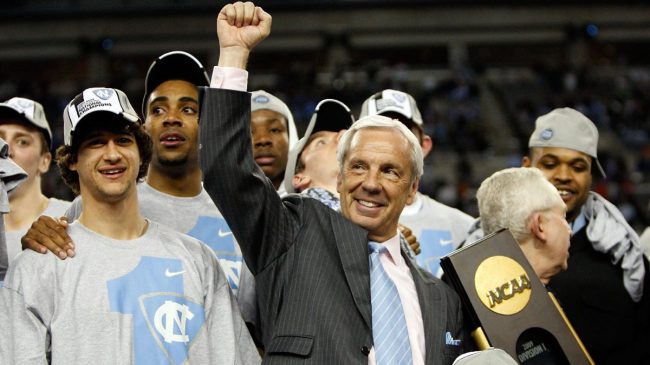 This year was supposed to be one for the storybooks for Duke and legendary head coach Mike Krzyzewski.

He was the talk of the season, and everything appeared to be working out according to plan.

Duke won the ACC regular season crown. The Blue Devils landed a No. 2 seed in the NCAA Tournament. Yes, there was that slight hiccup in Coach K’s final home game (a loss to rival UNC), but all of that was forgotten as the team raced their way to the Final Four.

Not only was that Final Four run playing directly into the storybook narrative, but it seemed that Duke was going to take down that same familiar foe to move on to the championship round.

North Carolina also found their way into the Final Four despite entering the tournament as a No. 8 seed. Now, the Blue Devils could get their revenge on the Heels for ruining Coach K’s regular season sendoff while also continuing their run to a national title.

But that’s where the story ended.

The Tar Heels upset Duke to successfully end the Blue Devils’ season while shutting the books on Coach K’s career. The farewell tour that had been publicized so frequently throughout the year was through, and another former legend was about to take the spotlight.

Last offseason, Roy Williams announced his retirement from coaching at North Carolina. There was no season-long going out tribute. He rode off quietly into the sunset, though you’ll still see him in the stands at Tar Heel games.

Williams and Coach K battled many times throughout their careers, though Krzyzewski had the upper hand in head-to-head matchups. With Williams now out of the picture, this season was supposed to be all about Coach K, but Williams unsuspectingly stole the spotlight.

Roy Williams did not have a farewell tour, but his imprints are ALL OVER tonight's national title game.

The two men who succeeded him at his two head coaching jobs — Bill Self and Hubert Davis — square off head-to-head tonight.

Williams’s connections to this title game are deep. He was a head coach at both programs before the current coaches succeeded him. UNC coach Hubert Davis was an assistant on his staff before accepting the head coaching role.

The college basketball world is taking note of the irony of this NCAA Tournament.

The ultimate plot twist is after the media spent an entire year crafting a narrative arc around Coach K, the 2022 NCAA Tournament protagonist turns out to be Roy Williams. pic.twitter.com/n9TiVtJVM1

North Carolina and Kansas will play for a national championship on Monday.

This season was a Roy Williams retirement tour all along.

Roy Williams ended up getting his retirement tour.

It’s pretty damn funny that we spent the whole season talking about Coach K only to get the Roy Williams bowl in the national championship game.

TURNS OUT IT WAS THE ROY WILLIAMS RETIREMENT TOUR

Roy Williams did it the right way.

The two head coaches, Hubert Davis and Bill Self, both succeeded Roy Williams at the head coach position at both of the schools

Roy Williams has two teams he used to coach in the NCAA finals pic.twitter.com/v7LS2S8oEG

One year ago today Roy Williams shocked us all and stepped away while handing his program over to his successor.

Then he came to almost every game. No pageantry and no season-long farewell tour.

Despite Coach K’s farewell tour, this season will end as a Roy Williams tribute.