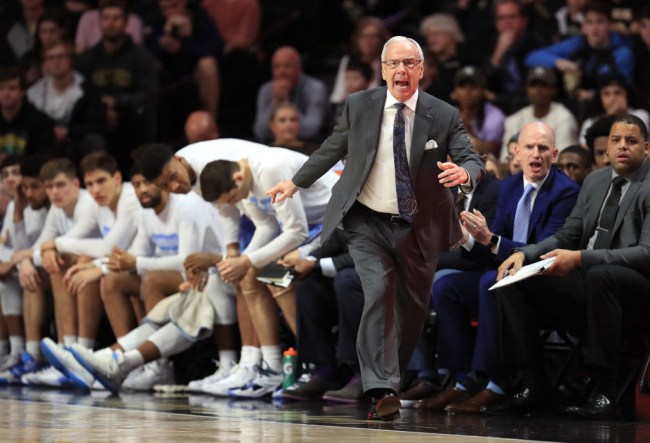 North Carolina is having an abysmal season. The Tar Heels extended their losing streak to six games on Monday night falling to Notre Dame and will now officially enter the ACC Tournament with a losing record. They will, of course, have to win the conference tournament to punch their ticket to the Big Dance.

Losing is always rough, but the fashion North Carolina has been losing in has been downright brutal.

Notre Dame hit a game-winning three with just over two seconds left on Monday handing North Carolina its third last-second loss in the last four games. UNC led the game by 15 points with just over eight minutes left, but completely fell apart. The Heels are a staggering 3-5 in games this season when leading by double digits with under 10 minutes to go.

All in all, North Carolina is 1-6 in games decided by three points or fewer. These kinds of losses can certainly wear on a team and a head coach and it looks like it’s officially hit an all-time frustration level with Roy Williams.

He’s a man that is known for not really cursing and his unique sayings, especially with the media, but following the loss to the Irish, he let the F-bomb fly.

Things are not in a good place in Chapel Hill; it’s honestly strange seeing an irrelevant North Carolina hoops team. Things don’t get any easier for Williams and his Tar Heels this weekend, either, as they travel to take on No. 11 Louisville.