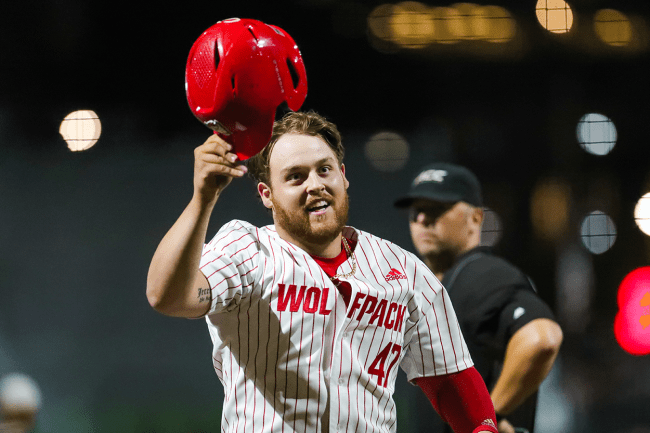 Tommy White stands 6-foot-0, 242 pounds as a freshman at North Carolina State and all he does is mash. The Wolfpack’s designated hitter, better known as ‘Tommy Tanks’ hits bombs on a ridiculously consistent basis. Sometimes even more than one in one night.

That was the case on Wednesday night as N.C. State played Miami in the ACC Baseball Tournament. Tommy Tanks went yard not one, not twice, but three times en route to a comfortable 9-6 win that advances the Wolfpack to the conference tournament semifinals.

White got things started in the bottom of the first.

And then he did it again during his second at-bat of the game during the third inning.

HE DID IT AGAIN!

Clearly, the Hurricanes did not learn their lesson. They pitched to White again in the sixth inning, and once again, Tommy tanked a tater.

TOMMY TANKS WITH HIS 3RD HR OF THE GAME. NUMBER 2️⃣6️⃣ ON THE YEAR. SETS A SCHOOL RECORD.@tommywhite44 | @NCStateBaseball pic.twitter.com/Bf31CDuOSb

Obviously, White and the Wolfpack were absolutely jacked to see the ball leave the ballpark in Charlotte.

Just a kid who hits a lot of bombs. pic.twitter.com/MuZJ9tVyYQ

From behind the plate, a fan video makes it look like White’s huge home run is sent into orbit as it flies deep into the night sky.

The second angle does the same, but it provides a better, cinematic look at the swing and celebration from start to finish.

The 💣 that broke the record. pic.twitter.com/TJgqZM9OnG