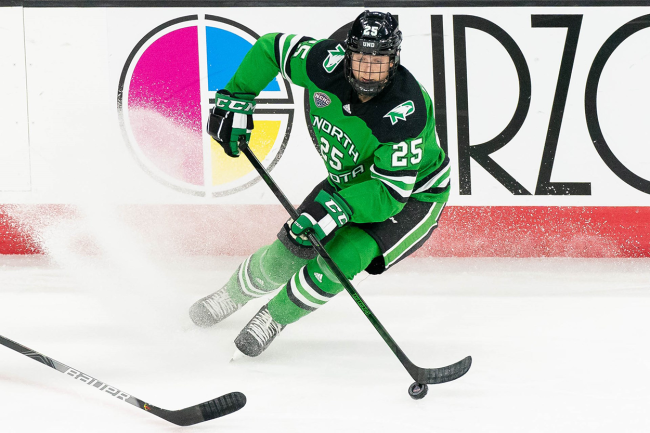 Do not get in the way of Tyler Kleven. If you do, the University of North Dakota ice hockey defender will absolutely light up your world, as he showed on Friday night.

Kleven, a sophomore, stands 6-foot-4, 213 pounds and he is a heat-seeking missile. During the Fighting Hawk’s game against Omaha, he delivered one of the most violent hits that you will ever see.

An Omaha forward brought the puck up the ice and was out in front near the blue line. At that point, Kleven circled back toward the middle of the ice, quickly changed direction and accelerated, lowered his shoulder, and laid him out. He sent him airborne for a moment and then flat onto the ice.

It was vicious. Take a look:

The craziest part of Kleven’s hit is that he was not, in any way, coming forward. Kleven was skating back on defense and barely turned up the ice to deliver a hit that will make your bones rattle. Imagine if he had some sort of forward momentum and did that?! Sheesh.

While you might watch the hit and think “OH MY GOODNESS,” those who watch North Dakota didn’t bat an eye. That is just what Kleven does.

Tyler Kleven bulldozes a player in the neutral zone. Gets an interference call however. #GoSensGo pic.twitter.com/cJZWmVfaXB

He’s a bully in the best way.

Kleven crushes people over and over…

How about another crunch for Tyler Kleven. pic.twitter.com/TPkPSK74H0

Tyler Kleven responds after Denver player injured his No Dak teammate. Thunderous hit and a scoreboard check. I love it @SensCentral @LalimesMartian pic.twitter.com/SePV8mFOvZ

Tyler Kleven lays the body well here, but the play results in a goal against.

Kleven also gets a penalty for elbowing. #Sens #GoSensGo pic.twitter.com/HMPfm3i01W

But that’s not all he can do. If you give Kleven the opportunity, he’ll snipe one past your keeper bar downski.

Kleven is currently tied to the Ottawa Senators organization and he’s going to be an immediate impact whenever he takes that next step.