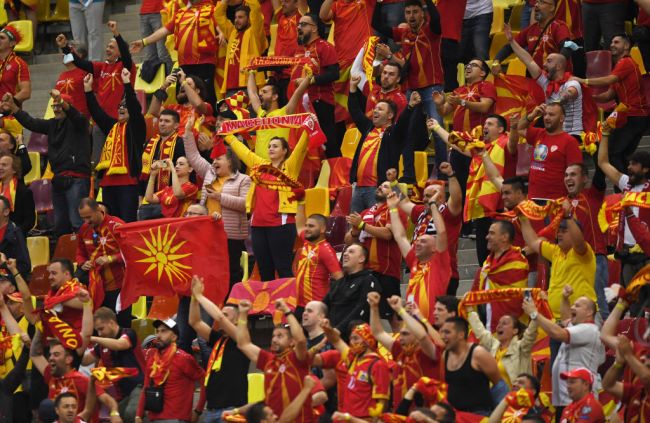 North Macedonia has only been an independent nation since 1991 as one of the successor states of Yugoslavia. In the country’s 30th year, its international football team qualified for its first-ever UEFA European Championship. To say that it is a big deal for the North Macedonians would be an understatement.

Prior to the team’s opening match against Austria, the team’s fans were out in mass. They went wild in the streets of Romania.

2 of my mates picked North Macedonia to support at the Euros and they went out to Romania yesterday for the match 🤣🤣🤣🤣 Scenes pic.twitter.com/9PIc4jfXpC

Sunday’s opening Group Stage match meant everything to the players and their fans.

Austria vs North Macedonia is about to get underway on beIN SPORTS MAX 3. #beINEURO2020 #EURO2020 #AUTMKD

A captain older than a country.

North Macedonia’s roster is led by Goran Pandev. The 37-year-old forward is seven years older than the country he plays for. He will captain the team throughout the tournament and Sunday’s match against Austra came two decades and one week after earning his first cap.

Pandev had intended to retire last season after a 20-year senior career. However, after Euro 2020 was postponed due to COVID-19, he chose to extend his spell with Genoa (his club team). He knew his country had a shot at what once seemed impossible— a Euros birth. North Macedonia then went on to beat Kosovo in the Nations League playoff semifinals and then Georgia in the final. Pandev scored the historic winner and was reduced to tears.

Goran Pandev (37) scores the winner for North Macedonia and they qualify for the Euro for the first time in their history!👏🏻

In March, just three months prior to Euro 2020, North Macedonia pulled an unimaginable upset of Germany in World Cup qualifiers. Pandev believed in his country and provided a goal. He looked to do the same against Austria.

He, at 37, is one of seven rostered athletes of 30 years or older for North Macedonia, a 30-year-old country. To add to the incredible story, Pandev found the net in the 28th minute. Listen to the call, “FAIRYTALES DO COME TRUE!”