Northwestern OT Rashawn Slater Was An Absolute Monster During His Pro Day, Securing His First Round Draft Status 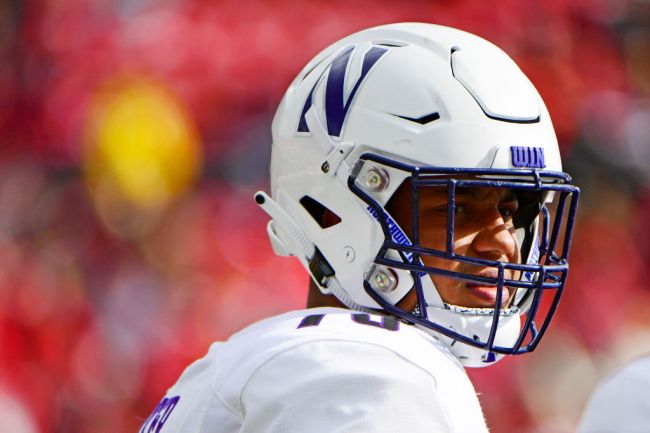 NFL Draft season is upon us and the next 51 days will be spent evaluating, discussing and obsessing over prospects before the first pick is announced on April 29. Due to COVID-19 restrictions, the pre-Draft process will look a little bit different this year and Pro Days will hold significant value without the NFL Combine. The gauntlet of power-five conference Pro Days really began today and Northwestern’s Rashawn Slater was the first potential first-round prospect to go through his workouts.

At 6-foot-4, 304 pounds, the Texas native was a four-year starter for the Wildcats and was a force to be reckoned with on the blindside.

Northwestern offensive tackle Rashawn Slater is a beast in the trenches. @rdsl8r

Watch what he did to last year’s No. 1 overall pick Chase Young. He dominated him for four quarters.

While his on-field play is impressive, AND SHOULD BE THE ONLY THING THAT MATTERS WHEN IT COMES TO HIS EVALUATION, the show he put on during his workout on Tuesday only confirmed what a freak he is. His afternoon began with some pass-set drills and on-field work. Slater’s technique is art and he shuffled through the three-cone drill in 7.48 seconds. To compare, D.K. Metcalf (who was/is ridiculed for his poor three-cone showing) completed the three-cone drill in 7.38 seconds.

He then moved over to the 40-yard dash and was FLYING for someone his size. Jets defensive tackle and 2020 No. 3-overall pick Quinnen Williams ran a 4.83-second 40 last year at 6-foot-3, 303 pounds. Slater, playing offensive tackle, ran a 4.88-second 40 at one inch taller and one pound heavier.

And then things got ridiculous in the weight room. Slater threw up 33 reps of 225 pounds on the bench to begin, which is a number that is about 10 more than average at his position for a typical Combine year.

A huge number at the @NUFBFamily Pro Day for the projected first rounder. @NFL@NFLDraft // @thecheckdown pic.twitter.com/bJkDrW4P5d

What Slater did next was the highlight of the day. Squats aren’t typically a part of the NFL Combine, and aren’t always featured in the Pro Day workouts, but he didn’t care. The big fella walked up to the rack and front-squatted 495 pounds (FIVE plates on each side) three times.

Northwestern OT Rashawn Slater front-squatted 450 pounds during his Pro Day and his teammates were HYPE 💪😤pic.twitter.com/bK19KLPvmX

His actual lift was crazy, but if I’m evaluating him, I’m more intrigued by his violent instincts. He may not look like a psycho with his unassuming demeanor and glasses, but watch his reaction when his strength coach/spotter slaps him a little bit too hard at the beginning. That first punch was exactly what you are looking for as a talent evaluator. Slater was ready to go to war.

Green Bay, San Francisco and Chicago were among many teams in attendance, but the Bears-Packers-49ers trio had the most prominent staff and front office members there to watch their potential future tackle dominate his workout.