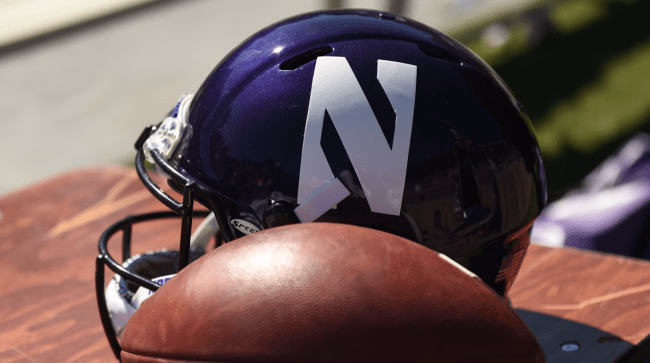 Northwestern University and the University of Nebraska will be getting the Big Ten season started this weekend over in Dublin, Ireland for a Week Zero game.

The Wildcats and Cornhuskers will be facing off at Aviva Stadium in Dublin on Saturday at 5:30 p.m. local time (12:30 p.m. ET).

The game, the first that Northwestern football has ever played outside of the United States, will be the part of the Aer Lingus College Football Series. Notre Dame and Navy will also do battle there as part of the series in 2023.

In celebration of their first ever game abroad, the Northwestern Wildcats revealed on Friday that the team will be wearing special helmets with an Irish flavor.

Superimposed over the traditional “N” logo on the Wildcats’ helmets is the flag of Ireland. On the back of each helmet will be crossed American and Irish flags. Northwestern will also be wearing all-purple uniforms for the first time in 16 years, according to the Hail to the Purple Twitter account. It will also be the first game for Northwestern wearing Under Armour designed uniforms and the first time since 2019 that Northwestern has used an alternate helmet or uniform design.

These are pretty sweet actually. https://t.co/ObdIFMZnFW

Northwestern being confused for a different college football team this week is nothing new. Not even the network airing the game, Fox, knows who they are.

They had to do something in response to all the Red N's on those Irish cars. https://t.co/eVA9EMLcxq

That’s in reference to all the Nebraska fans being mistaken as unusually proud new drivers.

This will be the third American college football game played at Aviva Stadium. The University of Notre Dame and U.S. Naval Academy played there in 2012, while Boston College and Georgia Tech met in the 2016 Aer Lingus College Football Classic.