Korean Sportscaster’s Nasty Nosebleed On Live TV Was So Gross, But He Honestly Played It Off So Cool 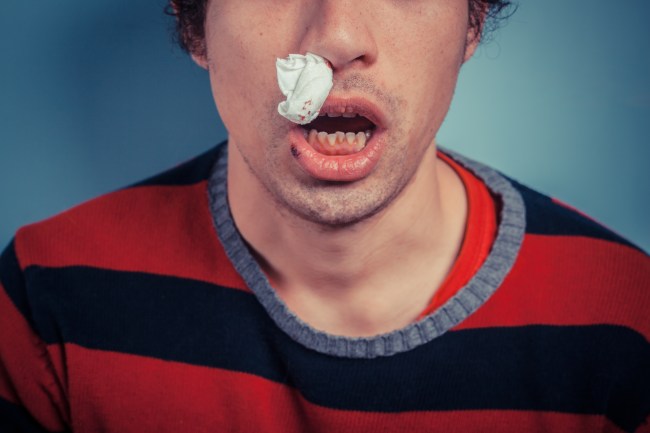 Nosebleeds are always gross, especially when they come at the wrong time. Oh, sure, I could sit here and give some examples of bad times for when blood just randomly pours out of your nose for no real reason, presumably, but there’s never, ever a good time for that sh*t to happen.

While a first date or job interview could be terrible for a nosebleed, being on live TV and getting one is up there with the all-time worst situation. Well, unless you’re a Korean sportscaster named Jo Hyun-il of SpoTV, because it happened to him, and he didn’t freak out or anything, he simply just went about his job as if nothing was happening, even after he noticed it.

Take a look at the video.

Whaaa? Guys, Jo Hyun-il didn’t even flinch. In fact, of the two men sitting at the anchor desk, it was his co-host who seemed more shaken by the whole thing than anyone else. I don’t know who Jo Hyun-il is, but that dude gets my vote for random badass of the year. In fact, someone hunt down his address and I’ll send him a case of good ol’ fashioned Natty Light to congratulate him for not losing his sh*t on live TV after his nosebleed, because there aren’t too many people who could do the same.

Watch, I just jinxed myself and I’m definitely going to get a nosebleed the next date I’m on, just because the universe can be a cruel, cruel place. I’ll channel my inner Jo Hyun-il and act like nothing wrong is happening. See, this guy inspires other men!