Notre Dame Wants To Be Very Clear That Its Mascot Is NOT Offensive, Points Fingers At Other Schools 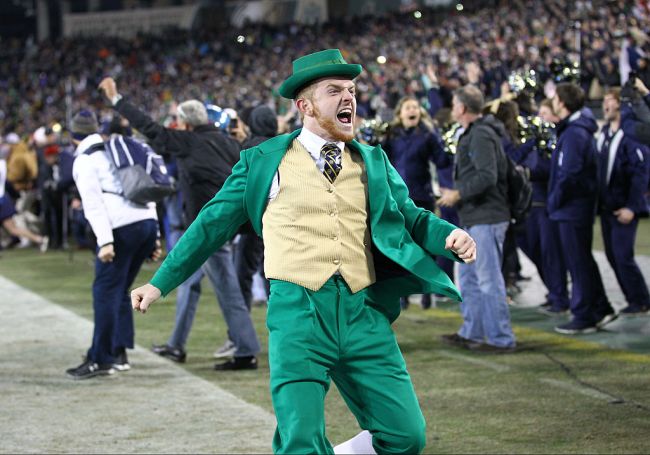 Notre Dame University is in full defense of its leprechaun mascot. The school, nicknamed The Fighting Irish, was deemed to have the fourth-most offensive mascot in the NCAA. It received the ranking from a recent survey conducted by Quality Logo Products Blog.

The survey asked 1,266 people to score 128 mascots from schools with Division-I football teams based on the following categories:

The survey was senseless, subjective and irrelevant. And yet it garnered some attention on a national level.

Notre Dame took notice of its negative remarks. The survey named the leprechaun as the fourth-most offensive mascot. It was ranked behind Hawaii’s Vili the Warrior, San Diego State’s Aztec Warrior and Florida State’s Osceola and Renegade.

Notre Dame goes on the defense by playing offense.

The leprechaun, one of the most famous mascots in sports, is a highly-coveted position on campus. Tryouts are a monthlong process. They require candidates to lead a mock pep rally, answer questions from the media, respond to a game situation, answer school trivia, dance an Irish jig and complete 50 pushups.

To be the leprechaun is a big deal and the mascot is a symbol of pride amongst students.

“Our symbols stand as celebratory representations of a genuine Irish heritage at Notre Dame a heritage that we regard with respect, loyalty and affection,” said the university.

Notre Dame did not take kindly to the ranking and immediately pushed back. In doing so, the school diverted the discussion toward other programs and did not hold back from throwing other mascots under the bus.

“It is worth noting … that there is no comparison between Notre Dame’s nickname and mascot and the Indian and warrior names (and) mascots used by other institutions such as the NFL team formerly known as the Redskins,” the school said to the Indy Star. “None of these institutions were founded or named by Native Americans who sought to highlight their heritage by using names and symbols associated with their people.”

When Notre Dame takes the field against Florida State on September 5th, the leprechaun will be on the sideline where he belongs. And so long as the university has a say, that will continue to be the case.