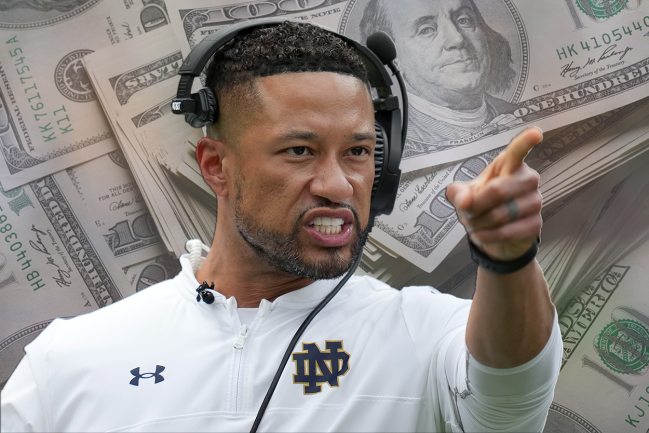 Conference realignment within college football is going to be complete and utter chaos over the next few years. UCLA and USC are joining the Big Ten, Texas and Oklahoma are joining the SEC, the Big 12 is trying to become the biggest conference in the country and there is a seemingly inevitable shift toward to massive, FBS super conferences.

Meanwhile, Notre Dame football remains independent. The Fighting Irish are not part of a conference.

Although the school has an agreement with the ACC that requires its football team to play at least five games a year against ACC programs— outside of those five games, Notre Dame is free to schedule who it wants, when it wants. Pac-12, Big 12, SEC, Sun Belt or otherwise.

But is that going to change as conferences continue to expand and evolve? Quite possibly.

However, the Big Ten reportedly has interest in adding the Irish, and Notre Dame recently demanded a huge sum of money from NBC to remain independent. If the Peacock wants to keep the Golden Domers, it will have to shell out big bucks.

Should that number not be met, the Irish sound serious about the potential of joining a conference.

What conference will Notre Dame join?

The answer to that question is interesting. Washington and Oregon were reportedly denied by the Big Ten as the conference holds out for Notre Dame.

That would be an easy move for the Irish, considering that they are already geographically located in the middle of the conference. But it might not be allowed.

ESPN’s current contract with the ACC runs through 2036. That grant of rights deal includes language that if Notre Dame chooses to join a conference in football before the deal expires, it is contractually obligated to join the ACC.

Can the Irish join a conference that isn’t the ACC even though the grant of rights deal with ESPN says otherwise? That is unclear.

Also, who is to say that Notre Dame won’t just join whatever conference that it wants? Were the Irish included in the ACC and ESPN’s deal, or was it agreed upon without them?

There are a lot of questions left unanswered about Notre Dame’s future. Surely, there are A1 lawyers in South Bend working 70 hours a week trying to poke holes in multiple contracts.