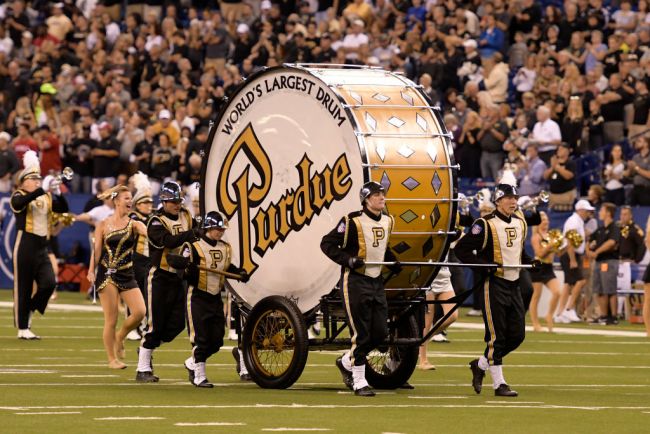 As if you needed another reason to root against the Fighting Irish, Notre Dame is causing the world’s largest bass drum to miss its first performance in more than four decades. When the Purdue All-American Marching Band travels to South Bend this weekend, it will be without its famous drum.

After a six-year hiatus, the two schools are set to renew their longstanding football rivalry on Saturday. They have played each other 84 times since 1896, but not since 2014.

The rivalry is very petty.

.@OneFootDown speaking of the big dumb drum, in 1964 the ND Band rolled out “The World’s Largest Flat Drum” to troll Purdue. this is the kind of petty I need from this program moving forward. pic.twitter.com/gmdqcPvgyo

A new policy put in place since the last time that Notre Dame hosted the game in 2012 is physically prohibiting what Purdue touts as the “world’s largest” bass drum from being on the sideline. The Irish won’t budge on its policy, which is super lame.

In 2017, Notre Dame built a new visitor’s tunnel. It is the exclusive and singular field access for visitors.

As you can tell, Purdue’s 7-feet tall, 3-feet wide bass drum will not fit through the tunnel. And to reiterate — Notre Dame will not let Purdue use its main tunnel, in which the drum would fit.

The Boilermakers, along with other visitors to Notre Dame Stadium, previously shared the same access to the field level as the home team. That included the bass drum, which has been present at every Purdue football game since 1979.

It will not be in attendance on Saturday, even though the drum is celebrating its 100th anniversary this year. Purdue is taking it as a direct, personal slight.

All of this goes to say that if you weren’t rooting against the Fighting Irish before, you should be now. Let the drum bang!