Is Novak Djokovic The GOAT? His Remarkable Comeback Win At The French Open Might Be The Deciding Factor 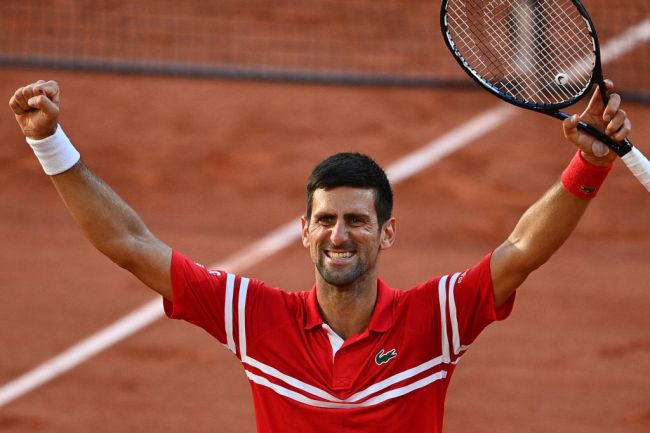 Novak Djokovic’s 19th Grand Slam title came with a comeback for the ages. After falling behind two sets to none, the World No. 1 rattled off three straight sets to claim the French Open singles championship. Nobody battles back like the Joker.

His 19th Grand Slam title puts him one away from tying Roger Federer and Rafael Nadal with 20 all-time 👀 pic.twitter.com/Te2YH8KBNx

The first set was a battle. Both competitors came out swinging and it resulted in an epic back-and-forth first set that went to a tie break.

Brought their best for the big stage 💪#RolandGarros | @steftsitsipas pic.twitter.com/D0EoQDYaXB

Stefanos Tsitsipas was dialed in and tracking everything down. He was all over the court.

In addition to his tremendous defense, Tsitsipas’ early touch was magnificent.

The unseeded 22-year-old won the tiebreak and took the first set. Momentum was entirely in favor of the underdog in the second set and he rolled to a 6-2 win.

Ahead two sets to love, it appeared as though it was Tsitsipas’ French Open to lose.

Even though his back was against the ropes, Djokovic wasn’t going to go down without a fight. He battled back in the third set and flipped the script, winning 6-3.

Though Tsitsipas needed to win just one more set to claim his title, he couldn’t stop the Joker. The match went to a fifth and final set after Djokovic took the fourth 6-2. It was a winner-take-all battle.

What. A. Rally. 👏 #RolandGarros pic.twitter.com/9Q6ZD3VJkL

In the end, Djokovic was simply too dominant and won the final set 6-2, and the match 3-2.

Djokovic first won the ever-elusive French Open in 2016, and his win on Sunday was his second.

By claiming his second title at Roland Garros, Djokovic made history. He is now the first man in history to win all four Grand Slams twice. Nobody else has done it— not Roger Federer, not Rafael Nadal, not Pete Sampras, not Andre Agassi, not Bjorn Borg, not John McEnroe — nobody.

Here is how his victories break down:

Djokovic’s win on Sunday only intensifies the debate as to who is the greatest player of all-time. If you count the titles above, it totals out to 19. Novak Djokovic has 19 Grand Slam titles. There are only two players who can claim more — Federer and Nadal. Each of them have 20 titles to their name.

Some people might say that Djokovic is already the GOAT. He won all four Grand Slams twice and he’s arguably the most dominant World No. 1. However, at only 34 years old, he has a lot of time left to etch his name confidently as the best player in history. With one more Grand Slam title, he ties for the most of all-time, and has done what no one else has. With two Slam titles, there is no debate.

We are witnessing history unfold and Djokovic coming back from two sets down was a remarkable feat to add to his storied career.