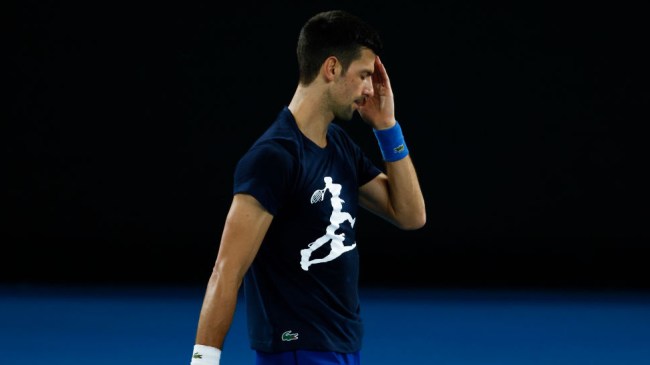 The lead-up to the 2022 Australian Open has been one full of drama. Top-seeded Novak Djokovic’s status for the tournament has been in limbo as he’s dealt with the country’s immigration protocols.

That standing appeared to be settled when he received approval to play in the Open earlier this week, but a twist of fate one day prior to the tournament’s start has made this a wide-open competition. Djokovic’s playing status has been overturned with the Australian government ruling against the world’s No. 1 player.

BREAKING: Novak Djokovic’s hopes of playing at the Australian Open have been dashed after a court dismissed the top-ranked tennis star’s appeal against a deportation order. https://t.co/pyqcpxtG0w

With Djokovic out of the field, the competition now becomes wide open. He was the heavy betting favorite and the overwhelming choice to take home the championship. Now, players like Daniil Medvedev and Rafael Nadal become the front runners, robbing Djokovic an opportunity to land his 10th Australian Open title. He already holds the record with his nine previous victories in Melbourne.

Putting political preferences aside, it’s a shame that fans will no longer be able to see the sport’s best player in a major tournament, especially with the decision coming less than 24 hours before the start of the event. Many have taken to social media to express their disappointment in seeing Djokovic leave the upcoming competition.

They couldn’t beat #djokovic so they just banned him from playing instead. #WeStandWithDjokovic

RT if you stand with Novak Djokovic!

So @DjokerNole loses his appeal. What a mess the handling of this whole case was, embarrassing for Australia & the grand slam tournament. #AusOpen2022

Novak Djokovic leaves the Marhaba lounge at Melbourne Airport for flight back to Europe. pic.twitter.com/Rg2D1XTTwW

You’ll roar again, @DjokerNole!
Stay strong, recuperate and come back stronger and better. I will be cheering you on loudly.
You’ll be alright, no doubt there❤️❤️❤️ pic.twitter.com/9OjInRuGXS

With the dismissal, Djokovic returns home to prepare for his next tennis appearance. Taking his place in Australia will be Italian Salvatore Caruso, who’s currently the 150th ranked player in the world.