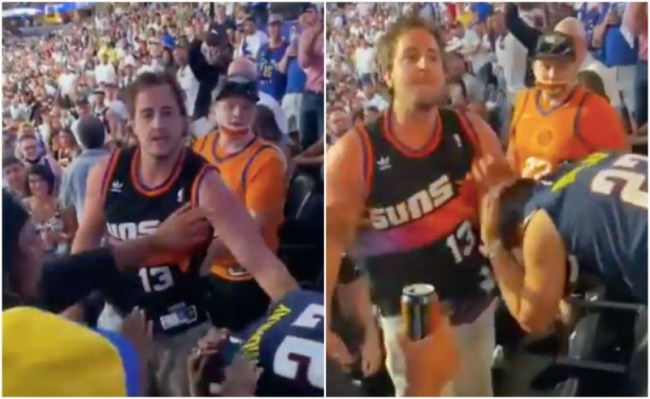 The Nuggets fan in the infamous “Suns in 4” video has come forward to defend himself and it’s not going well for him.

After the fight, the Nuggets fan in the video tried to claim victory despite the fact that everyone had seen get his ass kicked on video.

This week the Nuggets fan did an interview to claim that he didn’t really get beat up by “Suns in 4” while still rocking bruises and cuts on his face from the fight.

How am I just seeing this??? pic.twitter.com/9nYoFDD1Uq

The Nuggets fan was immediately mocked for his latest interview about what he claims went down during the fight.

"I didn't get demolished" – narrating of a video of him getting demolished https://t.co/86h9DGNAqp

Why would you sit down for this interview 😂😂 he beat yo ass Periodt! https://t.co/eEn59ChvER

🤣🤣🤣 he did a interview about getting his ass whooped 💀 https://t.co/NiWYI6rZKK

How you get SMACKED AROUND in the most disrespectful way possible then make a video explaining how you didn’t lose🤣🤣🤣 https://t.co/Gh2WLxEhUK