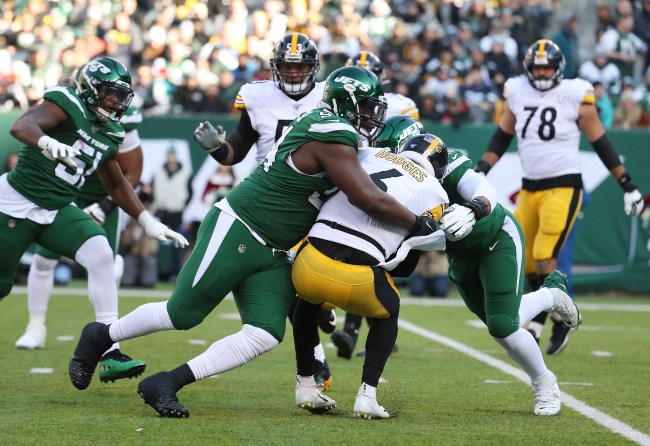 A weekly prize for stellar performance is nothing new in the NFL. We see similar rewards in college football with in-game awards like Miami’s ‘Turnover Chain’ but the stakes are bigger in the NFL where players can receive fat bonuses for a job well done and the coaches are paid gargantuan salaries.

Now, stop me if you’ve heard this one before: the New York Jets were not good this year. They are 6-9 on the season (1-4 division) and the team ranks 30th in Passing, 37th in Receiving, 31st in 1st Downs, 31st in Rushing, 28th in Points…Just a god awful offensive showing this season. But they were pretty solid on the defensive side of the game.

The Jets rank #7 in Yards-Per-Game, #15 in Passing Defense, but they are #2 in Rush Defense (behind Tampa Bay?!). It was the Jets’ defense that kept them in games this year and I can’t help but wonder what role defensive line coach Andre Carter had in keeping up the player’s morale with his badass weekly prizes.

The NYDailyNews is reporting that Jets defensive line coach Andre Carter was handing out literal weapons to his players this season for the best weekly performance. Those prizes reportedly included things like Axes and Swords:

It’s a literally a weapon of some sort. An ax, a sword, a club, a spear.
It’s also a symbol for what this group tries to be every day.

Phillips, the undrafted rookie who materialized out of thin air this season, won the most coveted weapon for his performance against the Raiders last month: A replica machete from the science-fiction thriller The Book of Eli.

“It’s definitely some friendly competition every week,” Phillips said. “We strive for greatness. We want to be the leaders of the defense as far as our style of play. Getting to the ball. Being the most physical. We definitely pride ourselves on being warrior-minded. And just hunting.” (via)

The story of how this all began is pretty cool. The coach was a martial artist himself and it started back in the pre-season and blossomed into the badass gifts of the past few weeks.

Carter, a martial arts enthusiast, decided to give everyone in his room an added incentive this year. In the preseason, the player with the most productive performance would receive a club from Africa. However, it was a rental only to be kept in the defensive line meeting room.
The stakes were raised when the games actually counted: A new weapon every week for the player that affected the game the most. Pure stats weren’t enough to get the prize, though.

Here’s how it worked: The player with the most “production points” got the gear. Make a great play, get a point. Make a boneheaded play like missing your assignment, subtract a point. The goal for each player each game was to get 6-8 “factors,” or smart plays to benefit the entire group.
Carter sometimes gave weapons to multiple players if the efficiency was comparable.

“It’s a reward,” veteran leader and captain Steve McLendon said. “He’s into weapons. He’s always been a giver. That’s what type of coach he is. So, it’s just a little bit of extra motivation to make the guys compete against each other. Just some friendly competition.” (via)

According to the Daily News, each of the defensive linemen has earned a weapon this season. In his second season, Foley Fatukasi picked up an ax and a spear. Quinnen Williams, Henry Anderson, and the others also all received some sort of martial arts weapon from the coach throughout the course of the season.

It’s also created a sense of camaraderie amongst the linemen. McLendon won a spear for a job well done but then gifted it to Bronson Kaufusi ‘as a token of his gratitude’ for helping out the crew at practice.

I’m having trouble wrapping my mind around this, to be honest. Most pocket knives are illegal in NYC but these dudes are out here walking around with spears and axes. Yes, I know the team’s facility is in New Jersey but a lot of them live in the city. Imagine walking your dog down W. Broadway in the morning and you see some dude stepping out of a Mercedes-Benz with a fucking spear in his hand!

The whole story of the Jets players receiving these gifts is pretty wild. You should click here to read it over on the Daily News.