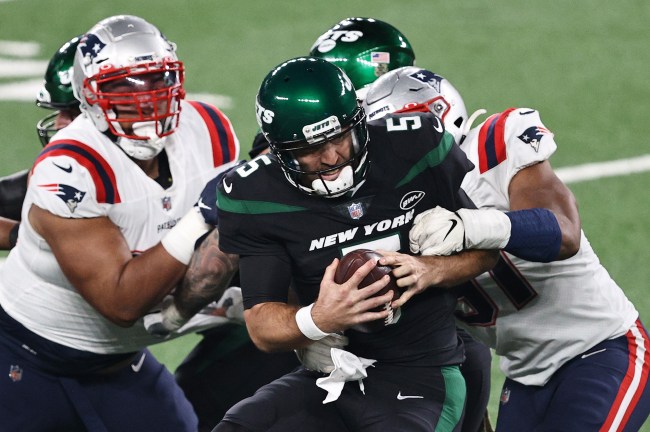 Clemson QB Trevor Lawrence appears to be a once in a generation talent and Jets fans want the team to do everything in their power.

Unfortunately for those fans who were looking forward to the team tanking the season for Lawrence, the Jets played an extremely competitive game against the Patriots on Monday Night.

No please don’t. There is a plan in place. DONT WIN! Thats what we are good at. Don’t mess this up @JoeFlacco https://t.co/XG5OLLo18v

The Patriots ended up producing a fourth-quarter comeback that ended in a 51-yard game-winning field goal by Nick Folk with no time remaining on the clock.

After the game, Jets fans cheered the fact the team was winless on were on their way to getting the #1 pick.

THE DREAM LIVES ON @nyjets pic.twitter.com/KjH5JVFwAY

The Jets played a close game, but lost

For any other team, this would be heartbreaking. But for the Jets, this is fantastic because THE TANK IS STILL ON pic.twitter.com/G5X0cp4VKE

DO YOU BELIEVE IN MIRACLES? YES!

9 losses down, 7 to go. The dream is alive 😍 #Jets https://t.co/GJrWw4ulkd pic.twitter.com/WBSWmlbAUp