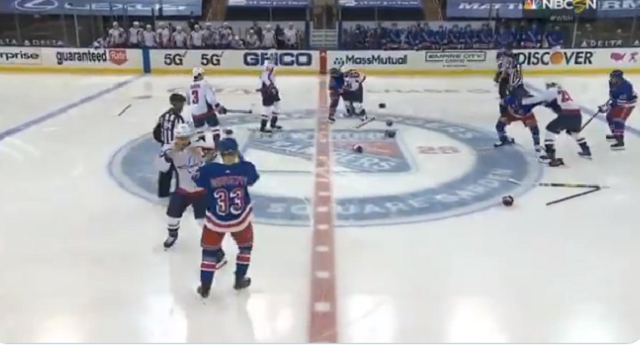 Hockey might be the only sport in which a game can begin with an all-out brawl.

The bad blood between the Capitals and the Rangers has been brewing ever since Caps’ Tom Wilson delivered a sucker punch to the back of the head of Rangers forward Pavel Buchnevich and slammed Artemi Panarin during their game on Monday.

Tom Wilson once again crosses the line, as he goes after Pavel Buchnevich in the crease after play is stopped #NYR pic.twitter.com/o8aSjcLWEV

This look at what Wilson did is even MORE disturbing. Pulled hair and then a face slam pic.twitter.com/GwTQmhzxCk

Wilson was only hit with a $5,000 fine and no suspension which led to the Rangers issuing a strongly worded statement blasting the NHL and Wilson.

The Rangers ending up taking matters into their own hands and immediately started brawling with the Caps as soon as the puck dropped during their game on Wednesday.

Tom Wilson was immediately attacked as soon as he checked into the game.

Tom Wilson challenged by Brendan Smith immediately after stepping on the ice for his first shift tonight pic.twitter.com/5KudVGgzQB

Another fight broke out between Ryan Strome and Lars Eller later in the first period.

Both penalty boxes filled up pretty quickly which led to hilarious images such as these.

Party in the penalty boxes pic.twitter.com/kOonaq9f41