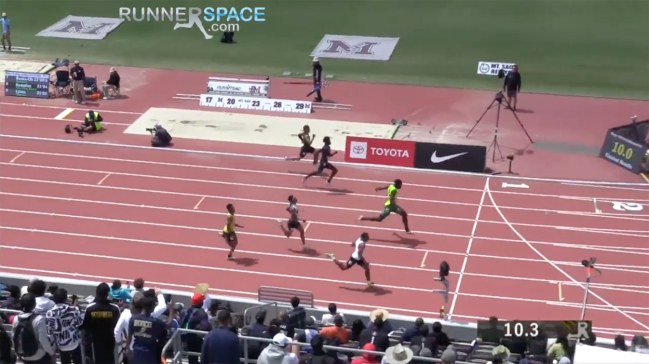 Nyckoles Harbor is not the top-ranked college football recruit in the Class of 2023, but he is the (unofficially) top-ranked freak athlete in his class. The junior in high school is absolutely massive and has speed that even most position players can only dream about.

Harbor, a soon-to-be rising senior at Archbishop Carroll High School in Washington, D.C., stands 6-foot-5, 235 pounds. He is slated to play the defensive end position in college because of his size, but he could just as easily lineup at almost every other position on the field and be just fine.

Harbor is ridiculously fast for a running back, let alone a defensive end of his stature.

As a two-sport athlete in high school, the nation’s No. 13 overall football recruit also runs the 100-meter and 200-meter sprints. His times are insane.

During this past indoor season, in January, Harbor ran the 200-meter sprint in 21.36 seconds. That was good for the fourth-fastest time in history for a high schooler.

Now, during the outdoor season, Nyckoles Harbor is blowing past everybody in the 100-meter sprint.

A few weeks ago, at the Beach Run in Myrtle Beach, he ran a 10.32-second 100-meter and won the event. His time was .25 seconds off of the Olympic qualifying standard and less than a second off of the world record— as a junior in high school who stands 6-foot-5.

To make things even crazier, Harbor ran a 10.29-second 100-meter sprint the day before.

Over the weekend, Harbor beat his own fastest time and beat everybody in the field in the process.

After somewhat of a slow start, he fell behind in the pack. It didn’t matter. Harbor turned on the jets, put his long stride to work and pushed through the line in first place.

It was a ridiculous performance for any high schooler, but let’s not forget that he is a 6-foot-5, 235-pound JUNIOR IN HIGH SCHOOL.

As things currently stand, Harbor’s football recruitment is wide open. He could go anywhere that he wants in the country on his athleticism alone, but he also carries a 4.5 GPA. That gives him the chance to play at literally any school, even those with difficult admission requirements.

Of the schools that are in the mix, Maryland, Michigan, Penn State, Alabama and Oklahoma seem to be the top-five. Harbor also has offers from South Carolina, Georgia, Notre Dame, Ohio State, USC, Texas, Florida State, Tennessee and countless others.

Whichever school is able to land a commitment from Nyckoles Harbor is going to be very, very happy. He is going to be nightmare for opposing offensive lines and might be the best player in the Class of 2023 based on athleticism alone.