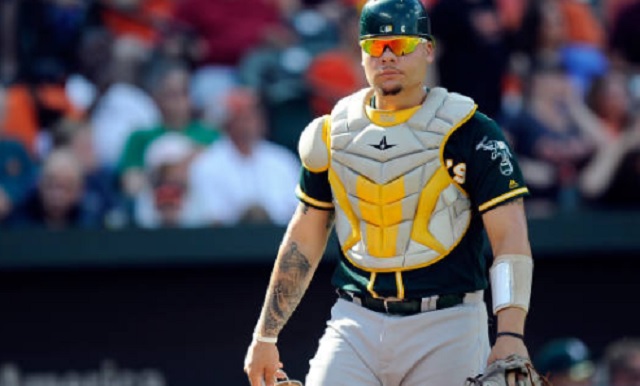 Last night, Donald Trump caused a firestorm after he bashed professional athlets who are protesting the national anthem before gamesat rally in Alabama.

… trump taking a veiled shot at colin kaepernick, says owner should say: "get that sonofabitch off the field right now… he's fired!!" pic.twitter.com/ttbOd0VrPG

Yeah I bet he doesn't step to @Kaepernick7 in person and call him and the other protesters a "son of a bitch." Ignorance from our Pres

Inequality is being displayed bigger than ever right now as our president shows that freeedom of protest and speech is not allowed..

This now has gone from just a BlackLives Matter topic to just complete inequality of any man or woman that wants to stand for Their rights!

Don't be surprised if you start seeing athletes kneeling in other sports now!! Comments like that coming from our president. WOW! ✊🏽✊🏽✊🏽

Maxwell, who is the produce of a military family, later protested the anthem before tonight’s game against the Rangers by placing his hand on his heart and facing the flag while taking a knee.

From the @sfchronicle’s Santiago Mejia, here is A’s rookie Bruce Maxwell becoming the first MLB player to take a knee for the anthem: pic.twitter.com/q8QVY9hW15

From the @sfchronicle’s Santiago Mejia, here is A’s rookie Bruce Maxwell becoming the first MLB player to take a knee for the anthem: pic.twitter.com/q8QVY9hW15

Son of an Army officer, Bruce Maxwell was born on a U.S. base in Germany while his father was stationed there https://t.co/toDR0UsNr4