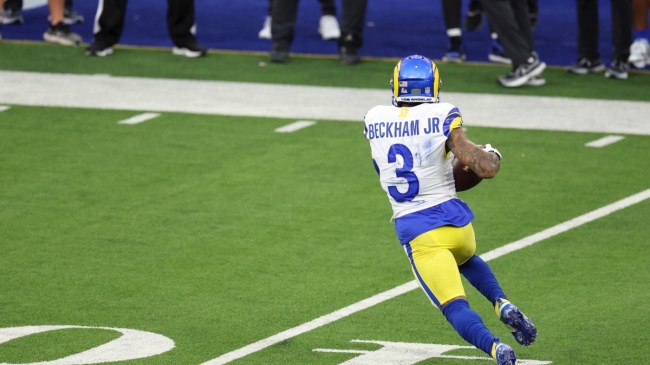 Odell Beckham Jr. had a career renaissance last year with the Los Angeles Rams. The former Brown and Giant had 48 catches for 593 yards last year in just eight total games for the Rams, and starred in the playoffs. He suffered a torn ACL in the Super Bowl, however. And, that led him to not sign with a team in free agency over the offseason. Instead, he’s been waiting for his injury to heal in hopes he can provide another boost toward a Super Bowl.

Teams like the New York Giants, Baltimore Ravens, and the Los Angeles Rams before their collapse were mentioned as spots for the LSU product. But, the Dallas Cowboys have emerged as the most likely destination. The Cowboys sit at 8-3 after a Thanksgiving win over the New York Giants, and they need help at wide receiver.

After the game, Jerry Jones had this to say about Beckham Jr.

#Cowboys owner/GM Jerry Jones said he spoke to UFA WR Odell Beckham Jr today. He would not characterize their conversation and said he was unsure whether Beckham will be healthy enough to play this season until he is more informed about his recovery from ACL surgery. pic.twitter.com/m3SIFGbION

He’s being coy about it, saying he doesn’t know whether OBJ will be able to return. But, the wide receiver certainly thinks he will be ready to play at some point, and the Cowboys don’t really need him up to speed until the playoffs as they look toward a Lombardi Trophy.

If he does sign with Dallas, they will have a three-headed monster of Ceedee Lamb, Michael Gallup, and Odell Beckham Jr. at receiver. Coupled with a great run game, that is going to be an awesome offense.