Odell Beckham Jr. Has A Solid Reason For Why He Had The Wrong Color Cleats During Browns-Broncos Game 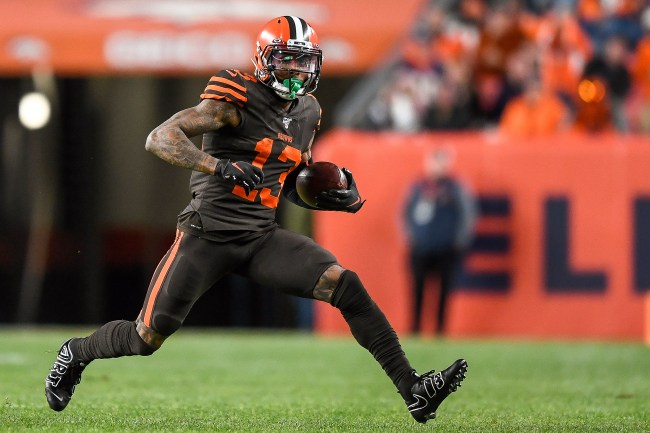 Odell Beckham Jr. has to feel targeted by the NFL — which is more than he can say when it comes to targets from his own quarterback, Baker Mayfield, on the football field, which is a whole different conversation. While the Cleveland Browns wide receiver has changed his act a bit since joining the Browns this past offseason by being on his best behavior, OBJ’s still finding himself making headlines for all the wrong reasons.

Earlier in the season, Beckham was fined for wearing a reported $350,000 watch during the game, and the latest infraction is even more ridiculous from the league. That’s because, according to reports, Odell Beckham Jr. and teammate Jarvis Landry were forced to change cleats in the Browns-Broncos game the other day because both players had “non-compliant” cleats for the first half, meaning the NFL’s code of conduct noticed the shoes weren’t the same color as the team’s uniform.

As for Odell Beckham Jr.’s reasoning for wearing the cleats, which were custom-made “Joker” cleats? He has a pretty good explanation as to why it happened.

“On Wednesday or Thursday, we switched jerseys from the white to the all brown. So, I had no cleats left to wear. None that I could’ve wore. And the black ones that I was wearing for the rest of the game, for some reason, was just hurting my feet. So, I went to the ones that was most comfortable. I was pretty sure that they changed the rule and cleats wasn’t a big deal. It’s only a big deal to people that are talking about it.”

For the full explanation from Odell, take a peek at the video below.

OBJ on the NFL telling him and Jarvis Landry to change cleats or sit the second half: pic.twitter.com/g0Q7GrdxOj

While OBJ did mention the league loosening up a bit on the whole cleats issues, he is right, because they did. Unfortunately, it was only for pregame cleats, meaning game-worn shoes must be colors matching team uniforms. Other than that, Week 14 gives players an opportunity to wear “My Cause My Cleats,” but that’s only one week, not anytime throughout the season. Yeah, it’s pretty dumb.

Kudos to Odell Beckham Jr. being proactive and talking about this stupid rule in the first place, but shame on the NFL for even enforcing the rule, because it’s something that doesn’t need to impact the game whatsoever. Just another example of the NFL standing for the “No Fun League,” right?