Odell Beckham Jr. Says He Has No Plans To Stop Wearing His $350,000 Watch After The NFL Told Him He Can’t Rock It On The Field 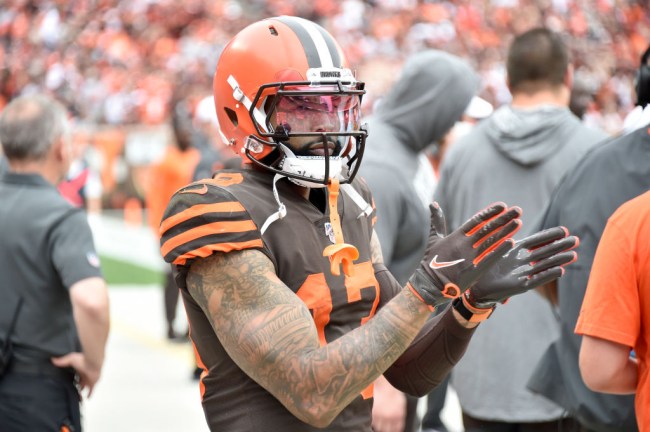 Last month, Antonio Brown decided to throw a fit after the NFL informed him he’d no longer be able to wear the helmet he donned during his time in Pittsburgh and even went as far to threaten to retire over the issue that would spell the beginning of the end of his time with the Raiders.

Now, we have a new apparel-related situation on our hands thanks to Odell Beckham Jr., who caught some heat from the NFL after he rocked a $350,000 watch on his wrist during the Browns’ blowout loss to the Titans on Sunday.

On Monday, the former Giant posted a cryptic tweet that Cleveland.com reports was in response to the bad news he received from the league, which said the watch qualified as a “hard object” and could not be worn on the field as a result.

If ain’t one thing…. it’s another…

However, it doesn’t look like Beckham is going to go down without a fight.

The wide receiver spoke with Mary Kay Cabot and told the reporter he has no plans to stop wearing the RM 11-03 McLaren Flyback Chronograph timepiece, saying he doesn’t understand what all of the fuss is about:

Don’t talk about any extracurricular, that’s just it. If anybody else would’ve worn the watch, or if it was a $20 watch, it wouldn’t have been no problem.’’

He also took issue with the NFL’s definition of a hard object, saying:

“You’ve got to look into the rulebook. It says you can’t wear any hard objects.

The watch is plastic. But people have knee braces on that are hard and made out of metal and you don’t see them taping it up, no jewelry on, so I’m good.’’

I for one cannot wait for this situation to spiral out of control until Beckham finds himself released by the Browns before signing with the Patriots.