Odell Beckham Jr. Is In A Bit Of Hot Water With The NFL For Rocking A Ridiculously Expensive Watch During A Game 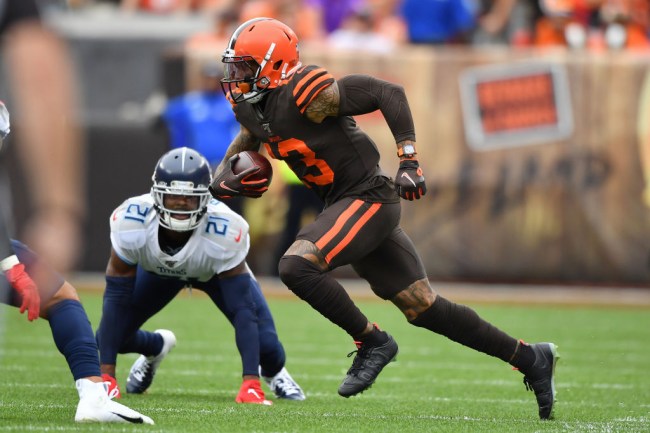 On Sunday, the Cleveland Browns hype train derailed in spectacular fashion when they lost to the Titans by a score of 43-13, which wasn’t exactly the best way to start off a season that was supposed to usher in a new era of football in the city.

Fans booed the team off of the field when halftime rolled around and at least one man went as far as to burn some apparel in protest after Baker Mayfield and his squad failed to live up to the lofty expectations that have been set for them.

Part of the reason Browns supporters were so amped for the year was the addition of Odell Beckham Jr., who didn’t exactly light things up after racking up 71 yards on seven receptions over the course of the contest.

However, the former Giant did manage to generate some hype thanks to his decision to rock a $350,000 RM 11-03 McLaren Flyback Chronograph watch as part of his uniform, which is one of the more impressive flexes I’ve seen in recent memory.

NFL players are permitted to wear certain pieces of jewelry on the field (assuming they don’t want to risk having them yanked off of their person when playing against Aqib Talib) but it appears the league wasn’t thrilled with Beckham’s accessory, which apparently qualifies as a “hard object” in its eyes.

As a result, Ian Rapoport reports the wide receiver was told he can no longer rock the bling while he’s playing (although he’s not expected to be fined or disciplined for his decision).

#Browns WR Odell Beckham Jr, who took the field with $350K Richard Mille watch, violated a league rule prohibiting hard objects, I’m told. (There is no rule against jewelry.) The league will address it with him and the team, but that’s likely as far as it goes.

When you consider the fact that there’s a chance Beckham’s hard object could have been obliterated if it had met another hard object in the form of a defender’s helmet, I almost feel like the league is doing him a favor here.

With that said, when you’re making almost $17 million a season, I guess there are some things you don’t really have to worry about.