Odell Beckham Jr. Flexed So Hard Wearing A $350K Watch On The Field During His Browns Debut 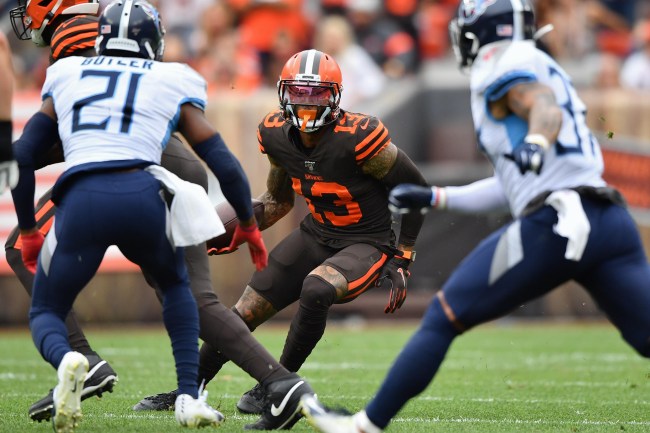 The Cleveland Browns were probably the most hyped team coming into the 2019 NFL Season. Not because they’re expected to win the Super Bowl but because for the first time in decades they’re actually expected to compete for the playoffs and were thought to be a legitimate contender. Then, well, yesterday happened.

Baker Mayfield and the Cleveland Browns looked crisp on their first drive of the game but went completely flat after that with Baker repeatedly getting brutalized by the Titans’ defense. The Browns got blown out by the Tennessee Titans 43-13 in Cleveland. Fans paid good money to see their hyped team get blown out at home!

Former New York Giants WR1 Odell Beckham Jr. made his debut with Cleveland yesterday. He had 71-yards on 7 catches (11 total targets). Not a bad first showing when your quarterback (Mayfield) was getting demolished by the Titans Defense and threw 3 interceptions.

That wasn’t OBJ‘s big storyline, however, it was all about his RM 11-03 McLaren Flyback Chronograph that he wore in the game. When that watch was released in 2014, Richard Mille only made 30 pieces and they were sold for $160,000 direct from the brand if you could even get your hands on one.

The RM 11-03 McLaren Flyback Chronograph is actually valued at around $350,000 on the secondary market where most people purchase these luxury watches that are nearly impossible to get. Other athletes that wear Richard Mille watches include golfer Bubba Watson, Rafael Nadal (who had one on last night at the US Open), Brazilian soccer star Neymar Jr., and celebrities like Kanye West, Ed Sheeran, Kevin Hart, and Pharrell wear them.

Just let that sink in for a second…Odell Beckham Jr. was wearing a $350K watch IN THE GAME. Richard Mille makes some of the most expensive watches on the planet and they’re beloved by athletes and rappers. Partly because they’re so popular at the moment but also because of the engineering and craftsmanship. These watches are INCREDIBLY light.

I’m telling you don’t be suprised if Odell is doing a secret endurance test for Richard Mille. He’s worn this same watch for like 4-5 months now and no its not his only RM pic.twitter.com/l8XgXugbsT

The movement on the RM 11-03 McLaren Flyback Chronograph worn by OBJ in Cleveland’s game has 68 jewels and it’s perfectly balanced. This watch is actually ideal for someone like OBJ who is ballsy enough to wear it in a game. You can see a complete rundown on the specs of this watch here on the Richard Mille website.

Why would an NFL athlete EVER wear a $350K watch in a game? Other than to flex on everyone like myself who can’t afford at $350K Richard Mille, I’d suspect that there’s something going on behind the scenes. Maybe he wants to score that RM sponsorship or get priority for watch purchases.

I can’t even fathom the estimated value of all the free press Richard Mille got yesterday from OBJ wearing that watch and I’m sure it’ll be repaid some way or another.